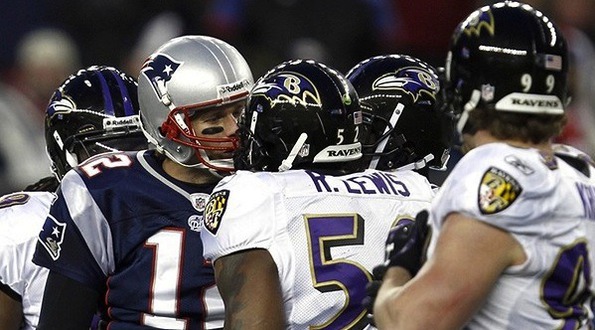 Those cheers you heard coming from couches across the country were saluting an amazing weekend of playoff football, setting up a potentially even more exciting Championship Sunday.

In this Sunday’s second game, Ray Lewis finds himself pitted against Tom Brady and the Patriots once again; and while you’re sure to be inundated with football analysis all week, we figured we’d play to our own strengths and just tell you which of the two legends pays more for car insurance.

So who pays less for car insurance: Tom Brady or Ray Lewis?

Age: Tom Terrific is 35; Iron Ray is 37, and retiring at the end of the season. Both are considered grizzled veterans on the field -- but on roads the data shows them to be in their primes, even a little young. The chart on this post illustrates how car insurance moves as men age, though something tells me Brady has a personal driver. Advantage: Big Ray by a yard.

Gender: I’ve got to tread lightly here because we’re talking about two seriously macho dudes. And while Brady can’t distance himself totally from this androgynous ditty, he can claim to be the most desired man in the nation not named Bradley Pitt. Meanwhile, Ray may or may not have been involved in a murder. But I digress, both of these fellas are pillars of the phallocentric society known to many as the NFL, which is a fancy way of saying they’re not women and therefore pay about 12% more for car insurance. Advantage: Early tie.

Education: People who went to Michigan like to think that Ann Arbor is the Harvard of the rest of the country. Thankfully (for the rest of us), carriers are not concerned with reputations, just degrees. Ray Lewis left the University of Miami before his senior year to lead the NFL in tackles for loss. He loses this one, but I don’t think he cares -- and that is why we love him. Advantage: Brady.

Family Status: Everyone knows that Brady is married to Gisele Bündchen (the umlaut worked!), the Brazilian supermodel who earns more than he does. He also has two children with Gisele, not to mention a son he sired with Bridget Moynahan. Though he’s never been married, Ray has 6 children, the eldest of which is a football prep star that will follow his father’s path to the University of Miami next year. Kids are great for insurance rates (their presence makes us drive more safely), but spouses are even better -- to the tune of 29%, though one can only admire Ray’s commitment to creating the conditions for life. Advantage: Brady

Occupation: Ray Lewis gets to hit and tackle people for a living. Tom Brady gets to star in a male self-actualization fantasy every day. Perhaps surprisingly, both careers are relatively safe in the eyes of carriers, who are most concerned with commuting times and distances. NFL players don’t actually work that many hours, and when they do commute they drive pretty traditional hours. Advantage: 50 yard line.

Ride: Looks like Ray gets around in some form of 2012 BMW sedan. The reason the details are unimportant is that Tom and Gisele’s phat custom Rolls Royce Ghost is going to be more to insure by a country mile. Advantage: Ray.

Driving Record: Everyone in New England knows that Tom’s car (a loaner) got hit by a godless soul who ran a stop sign like a linebacker flying across the line of scrimmage before the snap. Luckily, his face and body remained unblemished, though his driving record probably not so much. And yes Ray may or may not have been complicit in that killing, but he was never convicted of any crime; the case was settled out of court. Judgements aside... Advantage: Ray.

Credit Score: Both of these guys have made more than $40 million on the field, and loads more in endorsements. Yet both have some outside dependents to take care of: Ray and his many children; Tom and Ms. Moynahan and their offspring. Nevertheless, these guys have not gotten where they are by being deadbeats. One can only assume Brady pays the bills with as much precision as he throws 11-yard passes; while no one can (or at least does) question Ray Lewis’s Christian values. Advantage: Overtime tie.

So it's Ray Lewis by a nose in the car insurance contest; let's see if that success can carry over and lead his Ravens to Super Bowl XLVII.