Does Tim Tebow Pay A Lot for Car Insurance? 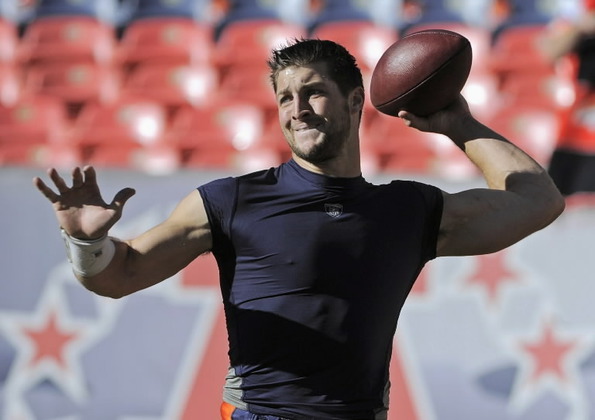 All roads eventually lead to Bob Dylan or Tim Tebow, and sadly I know a lot more about the latter. So does the transformational figure from Florida pay a lot for car insurance?

Age: Tim Tebow is only 24. Which means he’s still a young quarterback, and, in the eyes of insurers, a young driver. The prime of an NFL quarterback’s career is circa the ages of 28-34, while the prime of a driver’s life, according to the data inside the car insurance agency, is between the ages of 25 and 65. Conclusion: Starting on the bench for another year.

Credit Score: Something tells me that a man able to abstain from alcohol and pornography is also a man who thumbs his nose at usury. And while this may be exciting for a matchmaker setting up a man sans credit card debt, no credit is often bad credit to an insurer. Conclusion: Still sidelined.

Gender: Hard to deny Mr. Tebow is all man. This was welcome news to the old boosters at the University of Florida, but not so much for car insurance carriers who prefer working with the ladies because they make fewer and smaller claims. Conclusion: Baggage.

Education: After winning the Heisman Trophy as a junior, Tebow surprised almost everyone by electing to return to college for his senior season in order to earn his bachelors degree. Also impressed were the car insurance carriers who love folks with letters after their names. More degrees = better, and herr Tebow and his BA should save a few bucks for hitting the books. Conclusion: Warming up.

Occupation: Starting at quarterback in the National Football League may be a terribly dangerous experience -- but it has nothing to do with peril on the roads. This is a long-winded way of saying that Tim Tebow has high health insurance premiums, but not so much with auto. Carriers also like those who don’t commute late at night, when accidents are much more likely. And like other important world-historical figures, Tim Tebow does his work on Sunday afternoons. Conclusion: Believe!

Vehicle: Part of the Legend of Tebow is his ascetic 1967 Ford Pickup. That’s right, the man with everything eschews the diminishing returns of modern vehicular technology and wills himself back toward a Rousseauian state of nature: alone on the road sans air conditioning, burning diesel fuel with the rapid heat of a thousand burning suns. This might cause the country boy some problems in the Big Apple; the vehicle is not quite an antique, therefore will need a hyper-customized policy. Conclusion: Big city dollars.

Driving Record: Just because so many haters describe Tebow’s performances on the field as train wreckage, doesn’t necessarily mean his driving is as erratic. We can only assume that his clean sheet in the bedroom carries over to include his performance on the roads. At least we know there aren’t any DUIs. Conclusion: All-American.

Family: Tim Tebow’s wedding night will include a whole new world of car insurance savings. CoverHound data shows that getting married helps you save 29% on auto insurance. But for now Tebow will just have to deal with being single, wealthy and famous. Conclusion: Push.

Tim Tebow’s taken New York City by storm, and while he used the word "excited" 36 times in his press conference to describe how he felt about joining the Jets, he might be a little less enthused about how much he'll pay for auto insurance. Though his profile is pretty even in terms of metrics the carriers scrutinize when quoting a rate, he's moving to the New York / New Jersey area, home to the highest insurance rates in America. His pickup will likely need liability and uninsured motorist coverage, on top of the personal injury protection he'll need in his new home state.

Though this headache is nothing compared to navigating through the circus that is the New York Jets, it is yet another challenge that Tim Tebow will need to overcome.