By Mindy Lamont on December 7th, 2012 in Consumers 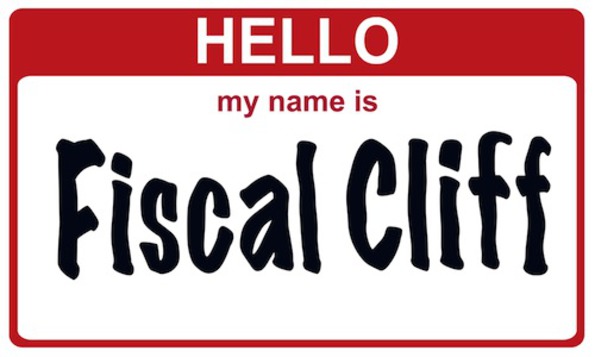 Well, that would be like trying to find the sunglasses you lost at some point during a pub crawl. The month after the pub crawl.

Because in January, the Bush tax cuts are set to expire and somehow, someway we're gonna feel it. Hate to disappoint you, but the so called fiscal cliff (aka the fiscal slope according to some and if you're Ezra Klein it's an "austerity crisis") is something to keep your eye on.

Even the holiday music I've got going in the background can't lighten up this one. So, continue...

First of all, cool your jets. Don't let the drama queens getcha. We're not going to expire if there are no decisions in Washington by year end. Of course not, because the world's ending on December 21st according to the Mayans. We might as well just get back to that pub crawl seeing as our days are so limited.

On the real, let's note that the fiscal cliff is referring to a combination of expiring tax cuts and the implementation of federal spending cuts. Most feel this combination will add to our current economic woes. While there are larger implications of this term, I wanted to focus on what it meant to us laymen taxpayers and what all the hullabaloo was about (plus, any excuse to use hullabaloo is generally a good opportunity to sound like a real nerd).

A few things to be aware of come January 1: Ordinary income tax rates will likely increase by about 3% for most tax payers and over 4% for higher earners. The current reduction of Social Security taxes from 6.2% to 4.2% is set to expire. Medicare taxes increase from 1.45% to 2.35% under the health care law. The top capital gains rate is scheduled to increase from 15% to 23.8%. The dividends tax rate is scheduled to increase from 15% to 43.4%. There is a new 3.8% tax on investment income for high income taxpayers thanks to the PPACA. There are many, many other attributes to coming tax law changes, but in the name of keeping you awake, we've stuck to some of the most relevant. And remember, just because these things are SUPPOSED to happen doesn't mean they will. We don't know what really WILL happen until decisions are made in DC.

Next week I'll be back with a few suggestions on strategies to help with some of these proposed anti tax cuts.

Until then, I'll go back to my holiday music and looking for those sunglasses.

PS: I did find a tool that does the work for us, calculating what the effects will be on taxpayers with just some simple inputs, here. Let's get serious. no matter who we are, what we really want to know is how it will affect our own wallet.

Mindy Lamont is the Founder & CEO at The Insurist. As a former sheep herder, she finds life insurance and financial planning just a bit more exciting.