How to Insure Your Segway 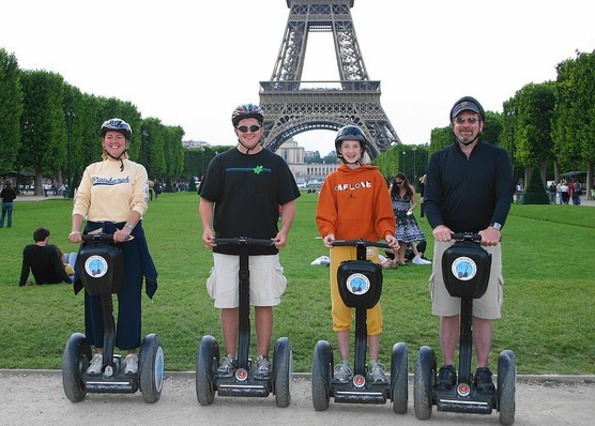 A friend of mine has a theory -- that I don't necessarily subscribe to -- that whenever you see Sofia Vergara on TV she’s doing shtick. She’s never supposed to be not funny, so the doubly negative theory goes.

I feel the same way about the Segway. It probably has something to do with the fact that Gob gets around on one throughout "Arrested Development," but I don't feel comfortable saying that's the only reason.

So why such angst toward the Segway? The first reason is obvious; it was way over-hyped. We heard all about Dean Kamen and how much of a genius he is, and how he was working on this super secret project that was going to change the world.

I also thought that we were all going to get fat.

When the project came more into focus a few years later, we learned that it was a transportation device that helped people get around at speeds of up to 17 miles per hour. Which is great, but here is the problem: I think a lot of us -- again, because of the hype -- thought the machine was going to hover in the air, not unlike the skateboards in Back the Future II.

Today there’s a skinny guy on my block that has a Segway and whenever he sails by me, I feel compelled to comment. Just the other day I cheered, "You're changing the world! Keep changing the world!" Last night I exclaimed, "Viva la Revolution! Nothing can ever be the same again!"

At first he humoured me, now he smirks and tries to out pace me, which he can.

He’s not the only person who has one. Sure, the Segway didn’t fundamentally alter the way we transport ourselves. But tens of thousands are sold every year, and they’re excellent vehicles for the blind and for injured military personnel.

Segways are not “cars,” per se and shouldn’t be treated as such when it comes to coverage. In other words, you needn't get car insurance for your Segway even if you use it similarly to how you would use a car.

Instead you should cover it under your homeowner’s or renter’s policy. And since a Segway is such an expensive subletter of your garage, it should serve as a catalyst to get such a policy if you don’t already have one.

Both homeowners and renters insurance protect the property in your residence (the difference of course is whether you own it) from theft and damages by accidents and natural disasters. Liability coverage here will protect you against hurting another person while you scoot around on your Segway. Just be sure to confirm that there are no sub-limits that would apply, i.e. for a stolen bike or sporting equipment at $2500.

If you don’t have homeowner’s or renter’s you could consider insuring the Segway as a motorcycle. We ran a test on our platform and rates came back at around $33/ per month, which is actually lower than some renters policy and far less encompassing.