Does Rick Santorum Pay A Lot for Car Insurance?

By Josh Anish on February 14th, 2012 in CoverHound 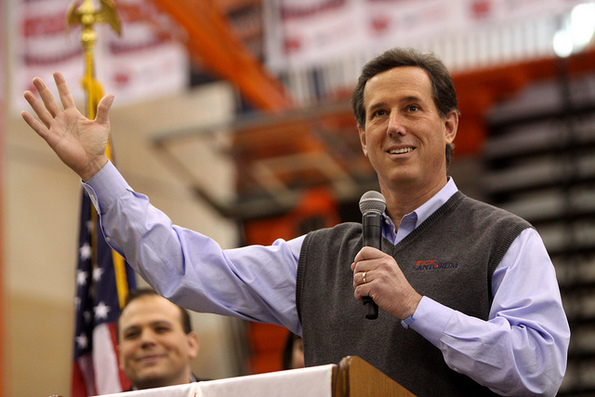 Politics is a fickle game; candidates rise and fall with the smallest hiccup or uneven performance. We’ve already anointed Mitt Romney the frontrunner and had him square off against President Obama in a car insurance smackdown. Then, after his victory in South Carolina, Newt Gingrich returned from the dead to enter the car insurance payment ring against Romney.

Now, after his troika of primary victories last week, Rick Santorum is a serious contender for the Republican throne. We therefore thought it proper to figure out whether he pays a lot for car insurance, relative to the national average.

Age: The former Senator from Pennsylvania is 53 and though he's never been confused for a centrist, this age puts him right in the middle of the car insurance comfort zone. Insurers reflexively charge more for older and younger drivers -- almost always defined as younger than 25, and older than 65. Conclusion: Looking good at his age.

Gender: Mister Santorum is all man, so much so that he recent got into a bit of hot water with comments on the role of women. And while those quotes might not be on the radar of insurance companies, those same carriers don’t prefer the likes of his gender. Men make more frequent and more pricey insurance claims. Conclusion: working against him.

Family: Forever a champion of family values, Mr. Santorum has been married to the same woman since 1990 -- which definitely works in his favor because if there’s anyone who values the institution of marriage more than the socially conservative former Senator, it’s the car insurance carriers who believe that wedded folks tend to drive more safely. And if that weren’t enough, the Santorums have eight kids! One for each night of Chanukkah! This should also lower his rate in the a major way, as parents understandably drive more cautiously than do people speeding to make a first date. Conclusion: homerun.

Vehicle: There’s not too much on the internets about the candidate’s wheels, but one can only assume that with all those children he likely drives some pretty safe cars. He doesn’t seem like the type to drive a Jaguar XK anyway. Conclusion: still looking good.

Education: Governor Romney and President Obama may have the better pedigree when it comes to the schools and programs they attended -- with lots of Harvards and Columbias on their resumes. But lucky for the Senator (and the rest of the country), insurance carriers are much more concerned the type of degrees you have, not the from where you received them. Mr. Santorum holds two advanced degrees -- an MBA and a JD -- both of which should help him save on car insurance. Conclusion: looking smart.

Occupation: Mr. Santorum’s occupation is much more difficult to pin down that his famously -- or notoriously, depending on your view of him -- consistent opinions. He started his career as a lawyer, and slowly started moving in government circles. The political marriage was consummated in 1991 when he successfully ran for Congress. Four year later, the Senate beckoned and he enjoyed six-year term limits until 2007 when he was defeated. Since then he has worked as a consultant, lobbyist and, well, politician, which is probably the profession that encapsulates his career best. On our form there’s isn’t a field in the occupation dropdown for politicians but we can venture to say those seeking or holding office work long hours and are therefore more likely to drive at stranger, more dangerous hours. Conclusion: negative impact.

Credit score: A net worth of $2.5 million might be a lot less than some of his rivals, but it’s still off the charts compared with that of most humans. Those assets combined with his track record for fiscal conservativism make it a good bet that his credit is even crisper than his sweaters. Conclusion: a credit to him.

So love him or dislike him, Senator Santorum probably doesn’t pay a lot for car insurance. The only strikes against him are his gender (not much you can do about that) and his job (which seems to please him just fine). Otherwise, he has many factors -- credit score, domestic situation, birth certificate, etc -- that car insurance carriers find attractive.

Only time will tell if this beauty is also beheld by voters.