Does Santa Pay A Lot for Car Insurance?

By Josh Anish on December 14th, 2012 in CoverHound 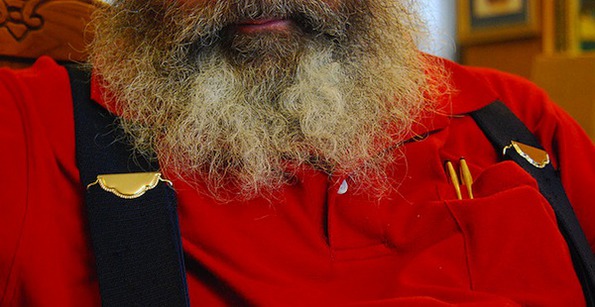 Justin Bieber, Tim Tebow, Jesus Christ, Oprah -- these are super important people. Well, so is Santa Claus -- and this is his time.

So does Santa pay a lot for car insurance?

Age. Old Saint Nick is older than you might even think. Saint Nicholas of Myra was a Greek clergyman in the 4th century -- that means our favorite gift-giver is more than 1700 years old! Car insurance starts getting more expensive around when you hit 60! Is he even allowed to enter the state of Florida? Conclusion: ba humbug.

Gender. Everyone likes Mrs. Claus. She’s like Nancy Reagan; it doesn’t matter if you think her husband is too old and jolly; you gotta respect the woman behind the man. Car insurance carriers love her too -- if SHE drove the sleigh there would be fewer and less serious accidents along the way based on historical data (concerning real people and real cars). Conclusion: ba humbug.

Marital Status. It’s a shame you can only marry the person you love once. Sure married couples save 29% an average on car insurance, but I feel like after 1670 years of marriage that Clauses should save even more. Conclusion: Get under the mistletoe you two!

Education. No one doubts Santa’s intelligence. The man and his devoted staff are somehow able to deliver the correct gifts to tens of millions of children around the world. Talk about logistics -- UPS can’t hold a candled wreath to this guy. But all this mastery of algorithms and SKUs doesn’t mean anything to car insurers -- they want framed degrees above your workdesk. And sorry, Santa, your honorary doctorate in emotional intelligence and superior listening skills don’t count. Conclusion: ba humbug.

Driving Record. Rumours of Santa driving after too many clear plastic cups of eggnog have persisted without any recorded evidence to back up such blasphemy. Santa shouldn’t be too worried about speeding tickets either. I mean, the only cop who would pull over Santa for visiting 1178 homes per second, would be a cop who 1) has a flying car and 2) is secretly a 5-star general in the war against Christmas. Conclusion: Seasons Greetings!

Vehicle. Okay, so a sleigh isn’t exactly a motor vehicle -- that’s where the reindeer come in. And for most people a sleigh would be a hobby stuffed in the garage, more reasonably covered by renters insurance. That said, a sleigh isn’t much less substantial than a Yugo, which is pricey to cover according to our platform. Conclusion: ba humbug.

Occupation. On our form Santa’s industry would be Travel/Transportation/Warehousing; his occupation within that industry would probably be Driver-Truck/Delivery. The bad news is that people who work in fields that demand a lot of time on the road pay more for car insurance because they are more likely to get into an accident at some point. The good news is I still believe in you Santa! Conclusion: Tie!

Family. Mr. and Mrs. Claus waited years for the stork, only to learn the gift of life was the was the one gift they couldn’t give to each other. So instead they decided to treat Dasher, Dancer, Prancer, Vixen, Comet, Donner, Blitzen and of course Rudolph as if they were their very own. And with so much pulling the sleigh, something tells me Santa’s not driving so safely just to protect the presents. Conclusion: That’s the spirit!

Credit Score: I’m just sure it’s fine. Santa’s not buying any of these gifts. He’s like StubHub, matching happy sellers with buyer. That shark hat you got your husband on the Visa card, Santa didn’t pay for that (cover kids’ ears) -- you did! Same deal with the whale watching trip off the coast when no whales showed up -- probably should have paid for that one with cash. Santa’s fastidious about his bills; I just know it. Conclusion: We’re leaving out cookies in the office!

So it’s a huge draw. Four bad red factors, four good green factors and a tie. But we don’t care. We love you Santa. And if you’re reading this I’d really love those headphones that don’t fall out of my ear when I jog. Thanks.