By Josh Anish on September 10th, 2012 in CoverHound 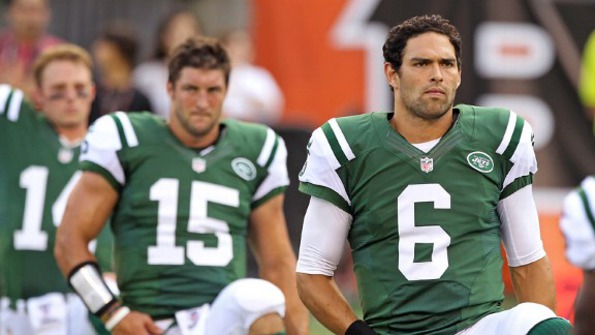 As an Eagles’ fan, I can’t fully remove myself of the schadenfreude of watching both these guys struggle on the field, so I’ll confine myself to watching tape and breaking down the film with a trained eye on who pays less for car insurance.

Age: The Sanchize and the Mid-town Messiah are both 25, though both seem older because they appear so often on television, messing with teleological senses of chronology. Twenty five is the year when carriers finally starting thinking we’re adult, so both QBs have that going for them, which is fine. Conclusion: Tie.

Education: It’s well known that Tim the Legend spurned (or at least postponed) the fiscal glories of the NFL for a few years to earn his bachelors from the University of Florida. There’s even a statue of the guy. For football dorks, it’s almost equally well known that Mark Sanchez left USC before his senior year, after starting for only one season, a fact which came as such a surprise to his coach that he practically refused to shake his hand on Sanchez’s way out the door. Unfortunately for Mark, insurers agree with coach Carroll; more education means more poise in the pocket, and on the roads. Advantage: Tebow.

Vehicle: As we showed in a similarly obsessive post, we revealed that Tim Tebow drives a rustic 1967 Ford Pickup. This vehicle might do wonders for his legend but not for his wallet when it comes to insurance, for the simple reason that’s an old car but not yet an antique which means he needs a custom policy. There’s very little on the web about Mark Sanchez’s car; perhaps the urban fella prefers taking limousines. Advantage: Sanchez

Gender: Tim Tebow has famously chosen to abjure getting to a know a woman, carnally, until marriage. Mark Sanchez, on the other hand, has apparently done some serious damage with the ladies, with a rap sheet that includes Hayden Panettiere, Jamie-Lynn Sigler (Meadow Soprano) and the faire Kate Upton -- not to mention all the other, non-famous ladies he meets in corners of discoteques. Regardless, their divergence of behaviour is immaterial to insurers. It’s not how you approach the ladies, but whether you are one. The data shows women drive more safely and make fewer claims. Advantage: Tie.

Credit Score: The two quarterbacks earn similar salaries, though Tebow certainly has more potential as an endorser of products (and ideas). Nevertheless, jealous tales of Sanchez’s late-night cavorting cloud my judgement when predicting his credit score. I mean, how do you expect the guy to pay his cell phone bill on time when he’s so busy texting back so many law school women. Tebow of course is a god-fearing man and most god-fearing people have antagonist feelings toward debt and simony. Advantage: Tebow.

Occupation: The difference between QB1 and QB2 on the New York football Jets might be a huge deal on the back page of the NY Post, the distinction means nothing to Flo, Dennis Haysbert, the Gecko or any other insurance mascot parading in front of complicated actuarial math. Advantage: Tie.

Driving Record. Can’t find too much on Mark Sanchez’s driving record, but he should be cited for running the Jets’ car wreck of an offense in the preseason. Tim Tebow can’t drive while intoxicated, let alone get caught, because he refuses to get intoxicated through sources outside his organism. Advantage: Tebow.

So there you have it, Mark Sanchez might be getting be starring on Broadway (or at least in New Jersey) for the Jets right now, but when it comes time for auto insurance review, Tim the Legend will take center stage.