Exploring the Most Expensive Accident Possible

By Alysha Beers on October 31st, 2012 in Consumers 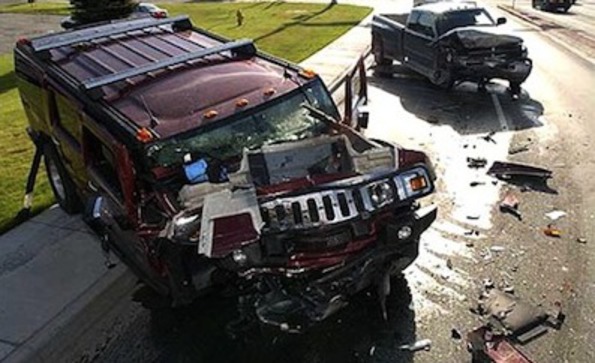 We’ve shown you the affect that speeding tickets, parking tickets, DUI’s, and not having continuous coverage can have on your car insurance premiums, separately. But what if you were in an accident and already had all these incidents on your record? Essentially, what’s the most expensive accident that you could possibly get into?

We’ve leveraged the CoverHound platform to crunch some numbers and spit out the answer. Let’s say you have the 2010 Hummer, live in San Francisco, have only been continuously covered for one year, are unemployed, and had a speeding ticket in 2008. Let’s see how a drunk driving accident would affect your car insurance premium.

The Hummer is fairly pricey to insure. The main reason is its safety ratings. The NHTSA scored it a 3 on rollover tests, a 4 on passenger side safety, and a 5 on the other three (driver, side front, and side rear). Overall, not so great. The IIHS ratings weren’t any better; the Hummer earned a rating of “Acceptable” on everything except the rear crash test, which received a the label of “Poor.”

Continuous coverage can do wonders for your premium. It shows that your “riskiness” is low and that you can pay your monthly insurance bill in a timely fashion. Having a lapse in coverage of more than one month can have a serious impact on the rates you are quoted. The difference between having 3 years uninterrupted coverage and having never had insurance is about a 60% increase. A one month lapse can affect your rate by about 8.5% per month. The fictitious driver in our example here, of course, has discontinuos coverage.

Speeding tickets aren't as bad as DUI citations, but they do increase your payments significantly. Our data shows that the effect of a speeding ticket just one year later mean an average 40.23% jump in your car insurance. And on your third anniversary you can expect your payments to still be 21.77% higher than what they were before the incident.

We recently wrote an article on whether your job affects your insurance rate. For the unemployed, it definitely does. According to our data, the average unemployed driver pays $145 per month.

Driving under the influence is not only impactful on your insurance, but is also dangerous to other drivers and to pedestrians. When you receive a DUI it affects your car insurance premium for years. In the first year alone it can increase your rate 94.13%. And in the third year you can expect it to still be 63.47% higher.

So with all this information and data, what’s the verdict on this hypothetical car accident? It looks like basic coverage would be between $186 and $512 per month. Yikes. That’s not even taking into account the cost of damages to your car and whatever/whoever you hit. It also doesn’t include the court costs or the cost of the ticket itself. Overall, I’d say it sounds like a good idea to not get behind the wheel in this situation.