By Katherine Moura on May 13th, 2014 in CoverHound 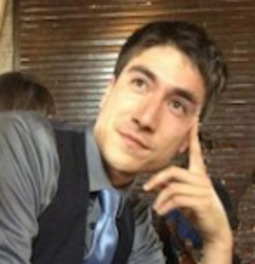 We have another new employee to introduce you to. Meet Yoshi Gillaspie, our newest addition to the CoverHound Engineering Team. I spoke with him earlier this week, so we could get to know the real Yoshi!

Where did you grow up?
I was raised in San Anselmo, just north of the Golden Gate Bridge.

What’s your favorite band or type of music?
I grew up listening to Hieroglyphics and Living Legends. These days I listen to a lot of Earth Wind & Fire and other groovy tunes.

If you won the lottery, what would be the first thing you would do or buy?
I’d buy my mom a Tesla. She’s been talking about wanting one for years, and I’d love for her to own the car of her dreams. (What a good son!)

What’s your favorite place you’ve travelled to?
I was actually lucky enough to actually take a year off of college to volunteer for ten months in ten different countries with my sister, and every place I've travelled to has been amazing for one reason or another. The best food was probably in Thailand (their fresh fruit is amazing and cheap). Overall, my favorite place would have to be Tokyo. It was such a quirky culture, and I love the neon city lights.

What’s your dream vacation?
A private island with the best surf in the world, surrounded by friends and family. As long as we're dreaming, the island would have an ice cream mountain for snowboarding and a coconut water river for rafting. The nightlife would consist of private concerts featuring The Beatles, Jimi Hendrix and my sister--she plays the piano and guitar. (Sounds like a rockin’-deliciously rad time!)

What’s the best vacation you’ve ever been on?
After high school, I went with seven friends to Costa Rica for three weeks (who I am still extremely close with to this day!). While it may not sound that exciting, one of the best days was spent playing foosball all day with the locals. We probably put 10 bucks into that game before the owner came over and let us all play for free.

What’s your favorite San Francisco restaurant(s)? (hard to pick, I know!)
Mission Chinese is a definite go to favorite of mine. Their thrice cooked bacon is ridiculously good. My recent favorite is State Bird Provisions. I love sharing plates, and State Bird has some amaaazing small plates to pass around. The hardest part is deciding which dishes to say no to.

If you could star in any movie in history, what would it be?
This is a tough one...I think Inception would be at the top of my list. To start, you get to travel the world (they filmed in 6 countries on 4 continents) and get to work with an all-star cast and director. On top of that, filming some of the crazy dream sequences would be really fun, such as the hotel fight scene where everyone is weightless.

What celebrity would you want to have drinks with?
Albert Einstein. While he is best known as a brilliant mathematician and physicist, I'd be more interested in talking philosophy with that man. He seemed to really have it figured out. I'd also be curious to ask him why he never learned to drive a car.

Looks like we have a creative, world traveling engineer on our hands! Welcome, welcome Yoshi! We are thrilled to have you on the team.