By Katherine Moura on December 8th, 2014 in CoverHound 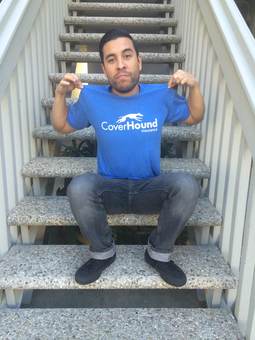 Meet Anthony Huerta, one of our Insurance Advisors. Anthony has been with the company since May of 2013. I sat down with him to ask a few questions so you could get to know him better, and here’s what he had to say.

Tell me about where you grew up? Do you have siblings? Kids?
I grew up in Santa Cruz county. There was a little of everything within a stones throw from where I lived--beaches, agriculture, mountains, redwoods and even a theme park. Very mellow, slow paced vibe, lots of VW buses and beetles. A hint of patchouli oil in the air. As for siblings, I have a younger sister, Alyssa who still lives up there. No kids yet. Wondering if storks have GPS because they keep flying past my condo but haven't found it yet. Hopefully soon.

What are your hobbies, and what do you do for fun?
I enjoy being active and playing sports like softball, basketball and surfing. I’m super into the NFL, NBA, MLB and CFB. Food, beer and wine events are also high on my list of things I like to do for fun.

Favorite sports teams and why?
Baseball: 2014 World Series Champs, the San Francisco Giants. Football: 49ers. Basketball: Los Angeles Lakers. As for why these are my teams? Because my dad is a fanatic of each of these teams and really didn’t give me a choice in the matter growing up. (Go Giants!)

What are your favorite tv shows/movies and why?
All I watch are re-runs of Joanie Loves Chachi. I hear people speak of other sitcoms like Modern Family and Two Broke Girls, but I doubt they offer the comedic touch and stylings of Scott Baio and the team of writers behind that show. I mean there's just no way.

If you could go out to dinner with anyone in the world, who would it be and why?
Prince. It just seems like I've never heard of any person or celebrity eating dinner with Prince. He's an iconic and incredible musician, but he is insanely odd. I don't think he ages. He looks exactly like he did when he first came on the music scene. And I just wanna see if he eats food, cause he quite possibly may be an alien.

If you were given 2 weeks off on an all expenses paid vacation, where would you go and why?
Indonesia or the Maldives. I don’t get to surf as much as I used to so that would be sweet to enjoy the surf and scenery with 2 weeks off, all expenses paid. But really going anywhere for 2 weeks that gets me away from having to see my co-workers, Jesse and Amber and not seeing their mugs every day would be a vacation in itself, and I wouldn’t even require all expenses paid. J/K you guys. I would still like all expenses paid. (Excellent choices! I’m dying to go to both of those places!)

If you won the lottery today, what's the first thing you would buy or do?
First off, I’m no fan of the lottery. It sends a horrible message to society that you don’t need to work hard to be successful, you just need to be lucky and have some magic numbers on a little piece of paper. But hypothetically if I was to "magically" be given an un-godly sum of money, I would buy both the E! and Bravo networks just so I can fire Ryan Seacrest and Andy Cohen for opening the Pandora's box containing "The Kardashians" and "Real Housewives" of whatever city. If there is any money left, I would give it to charity. (Oops! I’m guilty of watching these shows.)

If you could go back in time to any day in history or time period, what would it be and why?
Maybe the 60’s. Definitely not the best time for civil, social and geo-politics, but to hear and see some of the music and style from that era would be awesome, as some of it holds up today.

Do you have any pets?
I have two dogs—a Jack Russell Rat terrier mix named Boomer and a feisty little 8 lb Chihuahua named Roxy. Boomer was actually an intern here at the CoverHound Westlake office for a few weeks, while he was healing from a surgery to repair a torn ACL. He's back at home now doing good. He just needed to be supervised while his surgery was fresh. On that note, I want to give a shout out to our company President, Greg Isaacs for helping me out and allowing me to bring Boomer into the office post surgery and all of my co-workers for being super cool with it too.

Who are your favorite musicians, and what is your favorite type of music?
It really depends on my mood, but right now, I’ve been listening to a lot of hip-hop and rock. I really like Childish Gambino’s new album and a new indie band called Bad Suns. I’m also really big on retro-style musicians like Lee Fields, Mayer Hawthorne and Charles Bradley because of how they're recreating that soulful, Motown style and R&B sound.

Interesting facts about yourself?
I'm kind of a nerd. I like reading about technology, business, history and politics. I almost joined the marines out of high school, and I'm freakishly good at air hockey.

Why do you love working at CoverHound?
Because I'm fortunate to be on the ground level of a company that is revolutionizing the way consumers buy insurance. I also love that CoverHound has become a family. We joke with each other, we laugh with each other, we can argue or get angry with each other, but like a family through the good and the bad, we look out for each other, stick up for each other and pick up one another. How many people wouldn't wish they could work for a company like this? That being said, if that two week all expenses paid vacation could be extended to a 52 week paid vacation, then I’m outta here on the next plane to the Maldives! Bye Felicia! (Seems, Anthony is our resident comedian!)

Thanks for chatting with me Anthony! Your work ethic and sense of humor are such an important part of the CoverHound team!