By Katherine Moura on August 4th, 2015 in CoverHound 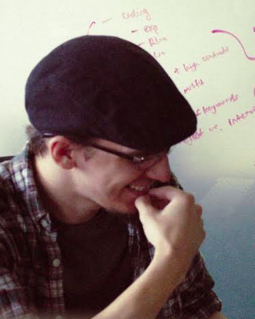 I'm so excited to introduce you to our newest San Francisco employee! Meet Andrew Valish, Frontend Engineer. Andrew was kind enough to take a break from some of his engineering duties to answer a few of my questions.

Tell me about where you're from and how long you've lived in San Francisco?

I moved to San Francisco a little over four years ago from a small town in the mountains of Pennsylvania.

If you could live in any period of history, when would it be and why?

I think living today is pretty cool, but if I had to choose, maybe the entire period of human history.. I don't think that could happen though, so maybe when my parents were kids so we could be friends.

If you could go on an all expenses paid 2 week vacation tomorrow, where would you go and why?

Definitely back home to be with my family. I mean, I'd certainly love to see more of the world, but since I'd be going tomorrow, there's nowhere else I'd rather be. (Home is where the heart is!)

If you could pick a super power, what would it be and why?

I would say the ability to see the future would be pretty cool, but most of what we do as innovators would probably lose its fun. Same with immortality.. I mean, if we had an indefinite lifespan, it would be pretty hard to appreciate the fleeting moments that we have. Oh! The ability to learn entire fields of study at the click of a button would be pretty amazing. That's what I'd choose. (Such great answers!)

What celebrity would play you in a movie and why?

Cuba Gooding Jr. I admit it's pretty obvious, but his charisma and kindness are untouchable!

What's your dream car or motorcycle?

Probably a Tesla Model S. As a kid I probably would've said a Dodge Viper, but let's be realistic.

Who would you want with you if you were stranded on a deserted island?

Everyone who won the Survivor game show or at least Bear Grylls or a really cool lady.

What are your favorite San Francisco restaurants

GrubHub would probably say Sparky's Diner, judging by how many late-night meals I've ordered. Every neighborhood has their specialties. Sam's in North Beach has some serious burgers. Taqueria Cancun in the Mission has the best carne asada super burritos...Bite Me Sandwiches in the Mission.

What brought you to CoverHound?

I think shopping for insurance is one of the most painful things to ask of anyone. I want to help change that. Aside from recognizing the enormous opportunity CoverHound has to disrupt the insurance industry, I really liked the team as soon as I had a chance to come in and meet everyone. There's a great mix of down-to-earth and productive culture here that I really appreciate. (Agreed!)

Andrew, thank you so much for chatting with me and letting us get to know you better! We're pumped you joined us!