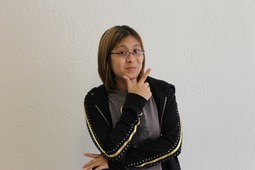 Laura comes to us from the suburbs of Chicago. In between obtaining her masters in computer science and enjoying San Francisco, she is the new engineering intern.

I had the pleasure of asking her a few hard-hitting questions.

Best job: This would probably have to be working at the farmers' market because of the free food it entailed (especially since all of it was local/organic).

Worst job: I really never hated any of the jobs that I had to the point that I can't say there was even a worst one. I think I only disliked parts of jobs for example having to refill the salad dressing bottle when I was a waitress. That was no fun, but other parts of that job were fun.

Guilty pleasure website(s): 6sense which is a provider for Asian dramas. On occasion I have a weakness for watching them.

Favorite TV Show on Premium Cable Network: Sadly, my favorite show House just ended, but I haven't had time to watch the last season of it yet so there is still something to look forward to.

Favorite book you've read in the last three years: This is actually a really tough question since I spent a little over a year as a book blogger... this meant I read a lot of books. Among the best were: Name of the Wind by Patrick Rothfuss The Warded Man by Peter V. Brett Little Brother by Cory Doctorow Unwind by Neal Shusterman I could go on and on about these four books, but suffice it to say, they have compelling ideas, characters, and immersive experiences.

Which actress would play Laura in the Laura Ku story? How about which character in a book would I like to play instead? I would really like to step in the shoes of Vin from Mistborn by Brandon Sanderson. She gets these really cool powers which basically let her travel via magnets at a really fast rate. She can also basically float in midair and sometimes see future actions of other people.

Why do you like working in Ruby on Rails? I've never worked in it in depth before, but I've heard of its rapid prototyping capabilities so it's something I've wanted to pick up, and this is the perfect opportunity to do so.

Why did you want to work at CoverHound? First and foremost is that the founders really seem to be on the ball. Second is the fact that they are focusing on disrupting an industry, which is something I wanted to be a part of.