By Yoshi Gillaspie on October 26th, 2015 in Technology 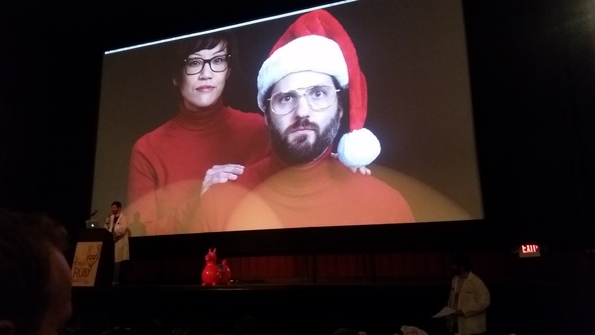 Flying into Austin, the stormy conditions seemed less than ideal for this year's Keep Ruby Weird conference. However, once we got into the Alamo Ritz Drafthouse, the rainy weather was of no concern. I had never been to a movie theater that serves drinks as well as a full food menu, with space between each row for waiters to take your order and deliver your food (San Francisco, I want this). As a single track conference, the movie theater was the perfect place to settle in and listen to some amazing talks.

Marcus Carey, a cyber security master, did an amazing job live hacking a demo app he had created using Burp to show common, easily fixable vulnerabilities. Whether it was planned or not, Kerri Miller's presentation on learning from career mistakes and failures did not work initially. Her ability to entertain the crowd as they diagnosed the problem showed that she did not only talk about adapting to difficult situations, she walked the walk as well. Christophe's talk on his zombie epidemic model struck a cord with me personally, as my past work has included building influenza pandemic models using MatLab. I never imagined building something like that in Ruby, and it was fun to see his model with green, orange, and red squares representing healthy, infected and zombified individuals roam around his map (you can checkout the code on Github).

As far as entertainment value, Ernie Miller took the cake. He had an amazing choose-your-own-adventure talk, in which the audience, via a provided website link, could vote on the direction in which they wanted the talk to continue in. Some of these choices were similar to college participation tests, such as voting on the best part of a war plane to add body armor to (and demonstrating Survivorship Bias in the process). Others were simply for fun, such as deciding if a young picture of Ernie with a mullet was majestic or not. He even had a full chat room near the end of the talk, which several individuals playfully tried to hack with HTML injection attacks.

My favorite talk, which may be a shared sentiment of many, was by Sandi Metz. Sandi's talk on Conformity, Authority, and Community was not actually about programming, but instead about human nature. She outlined three experiments to display three reasons humans choose to conform. The first was conformity, demonstrated with the Line Length Study, where individuals would often choose the incorrect answer if the rest of the subjects (actually actors) chose the incorrect answer before them. The second was following authority, demonstrated with the The Bystander Effect, where a test subject would immediately leave a room when alone when a fire alarm went off, but would stay an average of 10 minutes after the alarm being triggered if there were other subjects (actors) in the room not reacting to the sound.

Despite the message being a bit dark, there was a definite positive takeaway. While the original experiments were performed with certain controls, Sandi also described how each experiment was altered in order to increase diversity, independence and action. Individuals weren't as likely to agree with the group about the line height if one other person selected the correct answer or if they were to write their answer down. Individuals were less likely to obey bogus commands when the authoritative figure wasn't as overbearing. People were more likely to take action if directly requested to do so. All in all, there were ways to change the experiment environments where the subjects would not be as reliant on others to make decisions for them.

While Sandi's message can easily be applied to all aspects of life, her focus was on a company's work dynamics and getting the most out of your engineering team. One of the areas I immediately thought of for applying these ideas for CoverHound was for hiring. As we continue to grow, our interviewing process includes the team coming together to discuss the candidate. Almost always, the votes for moving forward with the applicant or not are unanimous. I believe we could probably generate more healthy discussion around what we are looking for in new developer hires by having the team write a few notes down before coming to the meeting, as well as encourage less senior developers to speak their minds on the candidates early on in the discussion.

All of the ruby speakers wore white lab coats with strange flying spaghetti monster symbols modified to look more like the Ruby logo. Seeing Sandi give this talk which highlighted people's nature to follow authoritative figures in lab coats added an interesting element to her talk. She joked about how they could've had anything stitched onto their coasts for their name, which she did not realize, and simply asked for 'Sandi'. To compensate for the plain coat, she asked for everyone to come sign her jacket with a rainbow of Sharpies. Although in reality I may not have signed her jacket because I'm introverted and shy, I'll tell everyone it's because the environment created by the community was great for allowing me to think independently and not conform.

I'm extremely thankful for CoverHound's positive position on helping their engineers grow, and sending me to Austin for this amazing event. If you happen to be an Engineer looking for a new opportunity, I highly encourage you to check out our jobs page.