How Julie Saved $1300 A Year On Car Insurance

By Katherine Moura on September 28th, 2015 in CoverHound 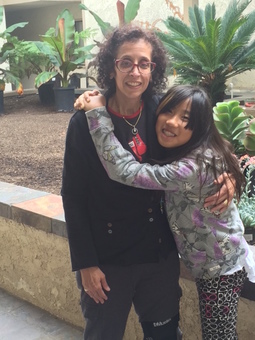 I recently interviewed new CoverHound customer, Julie Manton about how she saved $1300 a year on car insurance by shopping with CoverHound. Here's her story.

Tell me a little bit about yourself.

I'm a single mom, living in West Los Angeles. I have one child, Nikki, soon to be 11, whom I adopted from China in 2005. She is my world! I'm an Occupational Therapist, specializing in physical dysfunction. At the end of May, I will have been with the Department of Veteran Affairs for 15 years--a job I love.

How did you shop for car insurance before you found CoverHound?

I had been with The Automobile Club of Southern California (AAA), probably since I started driving in the 1980s. At one point years ago, I had searched out other insurance companies to see about getting a lower rate but with the same coverage. Nobody could touch AAA. This is not the case anymore, and AAA now seems to be one of the most expensive for auto insurance. I recently shared these findings on social media, encouraging anyone with insurance through them to check elsewhere.

In August of 2013, I was in a minor accident. It was my fault. My driver's side mirror scraped the passenger door of another vehicle. The line in the paint was the only damage done to her SUV. It was a mother and her three pre-teen to teenage kids. My car needed no repairs. Her sister-in-law is an attorney, so this minor accident became a winning lottery ticket. I blame AAA for paying out the $7,000, rather than fighting it. Luckily I had already renewed my annual policy, so I wasn't hit with the rate increase until the following year. My insurance went up by $600 for the year.

How did CoverHound help you?

I recently purchased a new vehicle. I had been paying $2,100 a year on a 2006 Honda CR-V. When I had that vehicle taken off the policy and my new 2015 Kia Soul added, my rate jumped to just under $3,400 a year. I knew I needed to look for insurance elsewhere.

In all honesty, when I called, I thought I was calling Progressive Insurance, but got CoverHound instead. I had never heard of the company, but was willing to give them a chance. I looked up the company, and saw that they had a positive rating with the Better Business Bureau. John was so nice, and actually spent the time searching out the best comparable policy for me. He took his time and got back to me when promised. He thought one of the rates was a mistake, being that it was significantly lower than the others, so he checked. It turns out it was actually even less than what he was looking at on his computer screen.

By John going the extra mile, I'm saving $750 over a six month period, $1,300 over the year. As a single mom of a tweenage daughter living on a single salary in West Los Angeles, that savings is huge! It's like someone handing you an additional $108 a month. I am so grateful to CoverHound for that.

Julie, this story warms our heart! Thank you so much for taking the time to share it with us. If you would like to share your insurance shopping experience with CoverHound, email marketing@coverhound.com.