Google goes all CoverHound in the UK 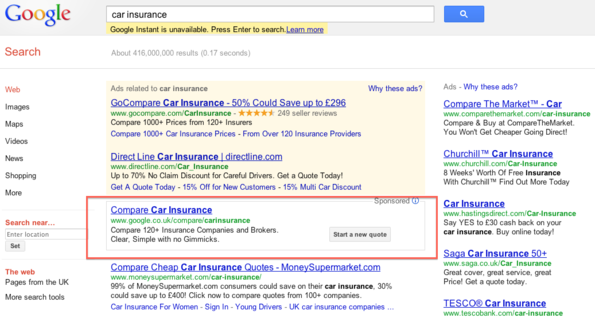 Imitation = the best form of flattery.

While we'd actually like Google to introduce instant car insurance comparisons in the US, since it will build awareness to consumers about CoverHound's model, we think it's very unlikely to happen in the near-term.

Our CPO, Rory, recently wrote about this on seobook, a leading search engine resource and blog.

Last week Google Advisor made its long-awaited debut in the car insurance vertical -- in the UK. Given Google’s 2011 acquisition of BeatThatQuote.com, a UK comparison site, for 37.7 million pounds ($61.5 million US), it comes as little surprise that the company chose to enter the UK ahead of other markets. While some might suspect Google’s foray into the UK market is merely a trial balloon, and that an entrance into the US market is inevitable, I certainly wouldn’t hold my breath.

Here are three reasons Google will not be offering an insurance comparison product anytime soon in the US market:

Finance and insurance is the number one revenue - generating advertising vertical for Google, totaling $4 billion in 2011. While some of that $4 billion is made up of products like health insurance, life insurance and credit cards, the largest segment within the vertical is undoubtedly car insurance. The top 3 advertisers in the vertical as a whole are US carriers -- State Farm, Progressive and Geico -- spending a combined sum of $110 million in 2011.

The keyword landscape for the car insurance vertical is relatively dense. A vast majority of searches occur across 10-20 generic terms (ie - “car insurance,” “auto insurance,” “cheap auto insurance,” “auto insurance quotes,” etc). This is an important point because it helps explain the relatively high market CPC of car insurance keywords versus other verticals. All of the major advertisers are in the auction for a large majority of searches, resulting in higher prices. The top spot for head term searches can reach CPCs well over $40. The overall average revenue/click for Google is probably somewhere around $30. Having run run similar experiments with carrier click listing ads using SEM traffic, I can confidently assume that the click velocity (clicks per clicker) is around 1.5. So the average revenue per searcher who clicks is probably somewhere around $45 for Google.

Now, let’s speculate on Google’s potential revenues from advertisers in a comparison environment. Carriers’ marketing allowable is approximately $250 per new policy. When structuring pay-for-performance pricing deep in the funnel (or on a sold-policy basis), carriers are unlikely to stray from those fundamentals. In a fluid marketplace higher in the funnel (i.e. Adwords PPC), they very often are managing to a marginal cost per policy that far exceeds even $500 (see $40 CPCs). While it may seem like irrational behavior, there are two reasons they are able to get away with this:

Regardless of how Google actually structures the pricing, the conversion point will be much more efficient for the consumer since they will be armed with rates and thus there will be less conversion velocity for Google. The net-net here is a much more efficient marketplace, and one where Google can expect average revenue to be about $250 per sold policy.

How does this match up against the $45 unit revenue they would significantly cannibalize? The most optimized and competitive carriers can convert as high as 10% of clicks into sales. Since Google would be presenting multiple policies we can expect that in a fully optimized state, they may see 50% higher conversion and thus 15% of clicks into sales. Here is a summary of the math: With the Advisor product, in an optimized state, Google will make about $37.50 ($250 x .15) per clicker. Each cannibalized lead will thus cost Google $7.50 of unit revenue ($45 - $37.50). Given the dearth of compelling comparison options in insurance (that can afford AdWords), consumers would definitely be intrigued and so one can assume the penetration/cannibalization would be significant.

Of course there are other impacts to consider: How would this affect competition and average revenue for non-cannibalized clicks? Will responders to Advisor be incremental and therefore have zero opportunity cost?

2) Advisor Has Poor Traction in Other Verticals

Over the past couple of years, Google has rolled out its Advisor product in several verticals including: personal banking, mortgage, and flight search.

We know that at least mortgage didn’t work out very well. Rolled out in early 2011, it was not even a year before Google apparently shut the service down in January of 2012. I personally don’t have a good grasp on the Mortgage vertical so I had a chat with a high-ranking executive at a leading mortgage site, an active AdWords advertiser. In talking to him it became clear that there were actually quite a bit of similarities between mortgage and insurance as it relates to Google including:

Hoping he could serve as my crystal ball for insurance, I asked, “So why did Advisor for Mortgage fail?” His response was, “The chief issue was that the opportunity cost was unsustainably high. Google needed to be as or more efficient than direct marketers who had been doing this for years. They underestimated this learning curve and ultimately couldn’t sustain the lost revenue as a result of click cannibalization.”

Google better be sure it has a good understanding of the US insurance market before entering, or else history will repeat itself, which brings me to my next point...

3) They Don’t Yet Have Expertise

Let’s quickly review some key differences between the UK and US insurance markets:

As you can see, these markets are completely different animals. Despite the seemingly low barriers for entry in the UK, Google still felt compelled to acquire BeatThatQuote to better understand the market. Yet, it still took them a year and a half post acquisition before they launched Advisor.

I spoke with an executive at a top-tier UK insurance comparison site earlier this week about Google’s entry. He mentioned that Google wanted to acquire a UK entity primarily for its general knowledge of the market, technology, and infrastructure (API integrations). He said, “Given [Google’s] objectives, it didn’t make sense for them to acquire a top tier site (ie - gocompare, comparethemarket, moneysupermarket, confused) so they acquired BeatThatQuote, which was unknown to most consumers but had the infrastructure in place for Google to test the market effectively.”

It’s very unlikely BeatThatQuote will be of much use for the US market. Google will need to build its product from the ground up. Beyond accruing the knowledge of a very complex, and nuanced market, they will need to acquire or build out the infrastructure. In the US there are no public rate APIs for insurance carriers; very few insurance comparison sites actually publish instant, accurate, real-time rates. Google will need to understand and navigate its way to the rates (though it’s not impossible). It will take some time to get carriers comfortable and then of course build out the technology. Insurance carriers, like most financial service companies, can be painfully slow.

I do believe Google will do something with insurance at some point in the US. Of the various challenges the company currently faces, I believe the high opportunity cost is the toughest to overcome. However, the market will shift. As true insurance comparison options continue to mature, consumers will be searching exclusively for comparison sites (see travel), and carriers will no longer be able to effectively compete at the scale they are now -- driving down the market for CPCs and thus lowering the opportunity cost.

This opportunity cost is much lower however for other search engines where average car insurance CPC’s are lower. If I am Microsoft or Yahoo, I am seriously considering using my valuable real estate to promote something worthwhile in insurance. There is currently a big void for consumers as it relates to shopping for insurance. A rival search engine can instantly differentiate themselves from Google overnight in one of the biggest verticals. This may be one of their best opportunities to regain some market share.