Does George Clooney Pay A Lot for Car Insurance?

By Josh Anish on December 7th, 2011 in CoverHound 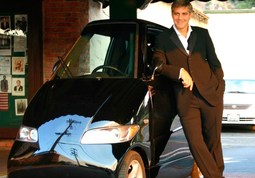 Though we’re extremely serious about car insurance here at CoverHound, we’re still people and therefore not immune to speculation and celebrity. These three interests naturally meet up trying to suss what the rich and famous pay for auto insurance.

So let’s break it down George Clooney (double entendre!).

Gender. If the screaming legion of female fans or the palling around with Brad Pitt throughout Ocean's Eleven isn’t enough to prove his maleness, perhaps the two Sexiest Man Alive titles are enough to cement George’s place as a man. Men pay more than women do for car insurance because they make bigger and more frequent claims. That’s one strike against him.

Age. Our hero has aged quite nicely, and has settled into middle age at 50. That number won’t help or hurt the price of his car insurance policy; carriers are weary of anyone younger than 25, and older than 70. For everyone else, it’s an even playing field.

Education. Clooney has been awarded the Summit Peace Prize by the Nobel Peace Prize Laureates and has also met with President Obama numerous times -- both for his work bringing attention to the atrocities in Darfur. So far be it from me to doubt the man’s intelligence. Regardless, car insurance carriers are sticklers for bachelors degrees, and George dropped out of the University of Cincinnati before earning his degree. Don’t shoot the messenger; I guess Mark Zuckerberg and Bill Gates pay a little more for car insurance too.

Driving History. In 2007, Clooney was involved in a serious motorcycle accident that landed him in the hospital. And while the issue of who was at fault -- Clooney or the car that hit him -- was settled out of court, the accident itself was surely enough to jack up his premiums.

Occupation. It shouldn’t come as any surprise that being a global icon/celebrity/sex symbol is risky business. Clooney suffered a brain injury resulting from an accident on the set of Syriana. Had he’d been an actual doctor, not just the one he played on ER, then his insurance would be a good deal lower. But then again, if that were the case, then we wouldn’t be having this conversation.

Cars. Clooney has long supported and owned electric cars. But while this might make him something a better citizen of Earth, it does not make him more attractive to insurers (more why electric cars cost more to insure). Another strike against him.

Home ownership. Finally. A metric where being a wealthy movie star is actually helpful in terms of saving on car insurance. Clooney has owned the same primary residence since 1995, in Los Angeles. Car insurance carriers like homeowners for many reasons, including the (alleged) fiscal responsibility of the owners. Additionally, many homeowners will buy home and car insurance from the same carrier, thereby making a switch difficult and often costly.

The fact of the matter is that with at least five strikes against him, George Clooney is not the sexiest man alive in the eyes of car insurance carriers. He probably pays more for car insurance than you do. But then again, he probably has much, much more fun than you do...