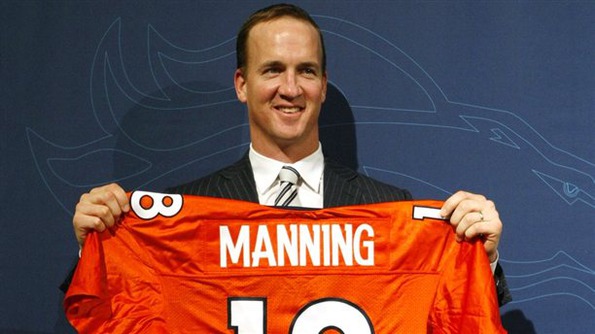 Josh: Rory I’m so fired up to take you down. I know you’ve been in the industry for seven years, and I’m the relative noob -- but I’ve written more than 150 articles and blog posts about car insurance in the last 12 months alone and I’m ready to flex my new muscles. Which way's the beach?

With the 1st pick in the fantasy football car insurance draft I select Peyton Manning. He’s 36 and insurers love that maturity; he’s like an offensive coordinator out there on the road. Number 18 also has a little something called a college degree, which, as we know, comes in handy on our form -- not to mention a wife and two kids, all constant reminders to drive cautiously. Colorado has only the 29th highest rates in the nation, plus the guy always does the right thing so I’m 100% sure he has awesome credit.

Rory: Peyton Manning? His 2 Escalades might be good for the Summit County snow, but are going to drive his insurance costs mile high.

Tempted to take a QB, but my instinct here is to take the top RB available, Arian Foster. At 26, he’s poised for better insurance rates. Further, by all accounts, including his Twitter where he recently tweeted: “Cars, clothes, and jewelry. These things are symbols of status and not necessity..”, Foster is a modest man. Crossing the pylon, and not getting into trouble or buying expensive to insure vehicles will be his focus in 2012.

Josh: Can’t rip on Foster too much, especially since the guy likes to read Shakespeare and maintain a vegan diet, but he is on the cover of Madden and I don’t have to remind you about the curse (ask one Vick, Michael).

This is where I should pick a running back but always choose not to because it’s boring. So I’m going with Larry Fitzgerald; I’ll throw the ball to him if I have to. At 28, he’s well beyond his 25th birthday, when car insurance rates tip toward getting less expensive each year. Not to mention the fact that he’s finishing his degree at University of Phoenix -- gotta applaud him for his drive, which should also help him save a few bucks save on insurance. Speaking of drives, he rocks a Mercedes 500 which isn’t expensive to cover. Oh yeah it is, whoops -- did I mention Arizona is the 8th cheapest state in which to insure a car?

Rory: Can’t hate on Fitz, a master of consistency. Finishing his degree online seems like nothing more than a nice marketing ploy for U of P, the Cardinals’ top sponsor.

I’m high on quarterbacks this year so its about time I take a QB1 stud - Aaron “Championship Belt” Rodgers. While Rodgers won’t yet bear the insurance cost benefits of being married (much to the joy of many young bachelorettes), by all accounts he is the type of responsible guy insurers love: a devout Christian who was an Academic All-American at Cal. And don’t worry about his “Victory Red” Camaro, awarded for winning Super Bowl XLV MVP -- as we know, the color of your ride doesn’t affect your insurance rate.

Josh: Last time I checked -- and I have checked -- insurers aren’t concerned with one’s relationship with Jesus. But do let me know if that changes; I’ll go back in time and pick Kurt Warner, especially since he has like seven kids and a harem of conservative cars.

I’m feeling social pressures to pick a running back here, so I’ll go with Ray Rice -- from Rutgers not too far from our hometowns in northeastern PA; the best news is that he’s in Maryland now, away from the uber-high car insurance holding corp known to many as the state of New Jersey. He left Rutgers a year early, but his mom’s a school teacher so I’m betting he’ll go back and get his Bachelors degree and save a few more bucks on his monthly bill. So he’s a keeper pick; this is a keeper league, right?

Rory: Good point. If religious fervor were a factor, I would have gone with Jesus himself, Tim Tebow of, unfortunately, my Jets. Instead I will focus my pick on selecting a player from a team that will actually score touchdowns.

Calvin Johnson. Shouldn’t be hard to justify taking Megatron, especially if he and Stafford can stay healthy. In fact, he was my top pick until the insurance variables were considered: Michigan is the Matt Millen of insurance states – a complete wreck due to inane no-fault laws resulting in drivers paying more than 47 other states despite a struggling economy. Due to this fact, Mega was bumped down to 5th for me, which was apparently higher than where you had him, Josh. Are there additional factors I ignored?

Josh: Nice research. Looks like Megatron rolls around Motown in a big tribute to German self-satisfaction -- the Porsche Panamera, which, according to the spreadsheet you just sent me, costs $446.68 a MONTH to insure. So you might want to start your 3rd pick on the bench.

I’m going with Jimmy Graham now. They guy’s a college grad, even a double major in marketing (so he’ll appreciate our work) and management (so he’ll be able to get what he wants from our agents). Plus he also played basketball in college -- and we all know that basketball players have a great sensibility on all matters in general. Plus since drinking on the street anywhere in NOLA is pretty much legal, he’ll never have a need to get behind the wheel!

Rory: I’m making up for that thin research with my next pick, time to take a RB2: Insurers love drivers who don’t make mistakes. Is it safe to assume that mistake-free performance on-field translates to the road? I think so.

I looked at 1,000 yard rushers over the last two seasons and found that Steven Jackson and LeSean McCoy had only 1 lost fumble in each of those years. Quite remarkable. But upon closer inspection, SJax’s stats are actually more impressive as he fumbles at a rate of 1 out of every 295 carries versus Shady McCoy’s rate of 1 out of every 240 carriers. This, along with the fact that Missouri drivers pay, on average, about 9% less for insurance than Pennsylvanians make Jackson the safe pick.

Josh: Good idea to stay away from someone who likes getting called “Shady.” Since I have all the skill positions covered now, I guess it’s time for me to go out and get myself a defense.

I’m going with the Steelers’. They are old, mature, humble -- and in a blue collar towne like Pittsburgh we can’t expect too many Porsche Panameras floating around, especially since the snow and street salts would ruin the precious paint job. Troy Palumalu could also bundle his auto with Lloyd’s of London policy for his hair and save a few bucks on both. Or maybe I should just pick the Jets D since women pay less for car insurance. Oh snap!

Rory: A ‘D’ in the first round?? I wish I was in your league. For my last pick, I’ll bring this draft primer to a close with an investment for the future (yes, this is a keeper league), QB Robert Griffin III.

RGIII not only has his college degree from Baylor, but finished in his junior year, giving him time to start his Masters degree while shattering Big 12 records while a senior. Both degrees will give him handsome discounts, enough to wipe out the costs associated with being a relatively young driver at 22. Also, Robert Griffin II was no slouch either, as a US Army Sergeant both him and even RGIII are eligible for additional military discounts. I have no doubt Griffin will continue to build a hall of fame profile, both on the field and in the eyes of insurers.