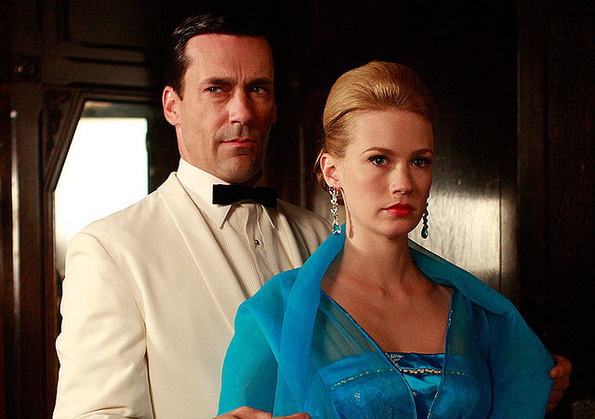 Now that Don and Betty are divorced and Betty’s tumor is benign (belated spoiler alert!), everyone can get back down to business. Don’s business being Megan and subconsciously caring a lot less about work. Betty’s business is of course navigating the shores of melancholic suburbia. While our business at CoverHound is just figuring out who pays more for car insurance.

Age: Lost in the all the zou bisou bisou legginess was that Don Draper is 40. Betty is the oldest 33-year-old east of Kobe Bryant, but have no fear premature agers of the world -- only your real birthdate matters. And as long as you’re between 25-65 car insurance carriers think that you’re at prime driving capacity and rubber stamp everyone as the same. So Betty and Don are both fine; Megan might be a different story (if she cared). Advantage: push.

Gender: The only people who like women more than Don does are car insurance carriers. Females ask much less of their car insurance policies than men do, in the form of fewer and less frequent claims. Advantage: Betty.

Education: Neither Dick Whitman or Don Draper went to college; in fact, one or both of them dropped out of high school. Every ounce of genius the man picked up seems to come from his innate strivings, the battlefield, plus good ol’ myth building and self-creation. Betty Francis (née Hofstadt, once Draper) earned a bachelors of anhedonia from Bryn Mawr College, which doesn’t mean that she’s more classy than Don it just means she has two more degrees. Advantage: Betty.

Occupation: Do any two characters on television have more circumscribed jobs? Don is an ad man and Betty is a housewife, or unemployed depending on the way you like to carve a turkey. The interesting question is whether insurers think unemployed people are more expensive to insure. And the answer is generally: yes, they do. The poor consistently pay more of their of income to insurance than do the middle class let alone the wealthy. In California, where liberals wrote most of the laws, it's illegal to base a car insurance quote on employment status. That information is fair game in New York, however. Advantage: Don.

Driving History. Remember Don’s car accident when he was in a period of drinking and shtooping Bobbie Barrett, that annoying lounge singer’s wife, and Peggy had to help bail him out from behind bars and board her -- essentially giving Peggy a huge secret about Don’s life? Neither did I. But you know who didn’t forget? The car insurance industry. Advantage: Betty.

Vehicle. Don drives a Cadillac which tests well in terms of safety ratings, but because of its tendency to get stolen it's inherently expensive to insure. Betty drives a grand old Ford with a similar safety profile, though it's a vehicle that portrays a humbler persona, mentally equipped for the responsibilities of real life. It’s a brand, but a safer brand than the Cadillac. Advantage: Betty again.

Credit score. I feel like Don always paid the bills. Both literally and metaphorically. We could go back and look at tape -- but was there ever a time Betty signed any checks? Don might have only above average credit -- everyone forgets or neglects to pay a bill from time to time -- but Betty may have no credit, which, as we all know, can sometimes be worse than bad credit. Advantage Don.

So though Betty seems to be getting the short end of the stick right now -- openly depressed, three kids, a dank house, a new husband who doesn’t speak French -- she can inwardly be proud that she pays less than her ex- when it comes to car insurance.