CoverHound Employees Turn Around an Unlucky Situation for Customer

By Katherine Moura on January 11th, 2016 in CoverHound 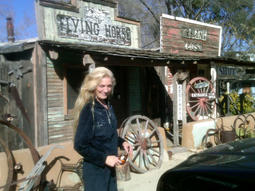 Michele Rolih was so thrilled with her experience with CoverHound that she wanted to share her story with us. Here's what she had to say.

Here's what happened. It was a couple nights before Christmas, I was passing through San Jose on my way up to Oregon. It was late, and a police lady stopped me after leaving the Black Lives Matter protest in Los Angeles. It was a hectic time between police and other people. I didn’t feel well-served by the way she stopped me and interrogated me, and she then said I want you to take a breathalyzer, and I said no way! I ended up getting a DUI at the age of 62, which I didn’t deserve, and I’ll never get again because now I know the law that if you refuse the breathalyzer in California, you basically automatically get a DUI.

I didn’t understand that. I thought she could accuse me, and I would just fight it in court. Months later in court, the Public Defender said to me (because I wasn’t going to pay for an attorney) that in California, if you refuse the breathalyzer, the jury almost always sides with the police officer, so there’s really no point in dragging it out. Anyways, that was the situation I had been in. I’d been with AAA for 15 years. I was a premier member with roadside assistance and everything was perfect, and then all of a sudden, my life was totally taken over by this experience.

I didn’t expect to get my license back until January of 2016 because it was suspended in early January 2015. I thought maybe if I go to the DMV and show them that I complied with every part of the program and all of the financials and everything that I would get a step ahead in getting my license back as early as possible. To my surprise, it worked. The DMV said I could have my license back, I just needed to bring them an SR-22.

I also needed to get the cheapest insurance rate. It was around the holidays, which is an expensive time, and I also had to pay for all four of my children’s flights home for Christmas. I called Nationwide, and they told me they don’t take people with SR-22s, so they said try Progressive. Instead, I did some online searches and came across CoverHound. When CoverHound answered the phone, it was John Boutin, and he was so amazing and understanding. He asked me the kinds of questions that made me feel comfortable and didn’t make me feel degraded by my situation, which would have really put a cap on the year.

Instead he turned the situation around and issued me an SR-22 immediately, got me my insurance, and I was back on the road the next day for the first time in almost a year! It was just a piece of cake, and he was so accommodating, and he told me he was going to email me everything. He said as soon as I finished signing everything online, I would get my insurance and SR-22.

Later that night I tried to do it online, and I couldn’t complete the process, so the next day, I called back. I received John’s voicemail, but he gave another number if I didn’t want to wait. I called that other number and Tyler answered. Likewise, Tyler was completely accommodating and understanding, but he said I actually needed to be connected with the Onboarding Team, so he transferred me to Kenndra. Again, a THIRD person, who was great to speak with! I was just amazed how three people in a row at CoverHound, a company I had never heard of, actually treated me better than any other insurance company I’ve ever dealt with over the years.

The next day when I called AAA to get a jumpstart on my car because I had not driven it in a year, the AAA lady told me (even though she works there) that she had issues with her insurance, and I immediately gave her John Boutin’s direct line at CoverHound. I said if anybody can get you on the road, these people can!

When people treat you as if they care about what actually happened, that makes commerce completely different. You weren’t there to just take my money, you wanted to help. It felt safe and trusting.

Wow, Michele, thank you so much for sharing your story! It makes us super proud to know that CoverHound is the best insurance company you've ever dealt with. :)