By Josh Anish on February 1st, 2013 in CoverHound 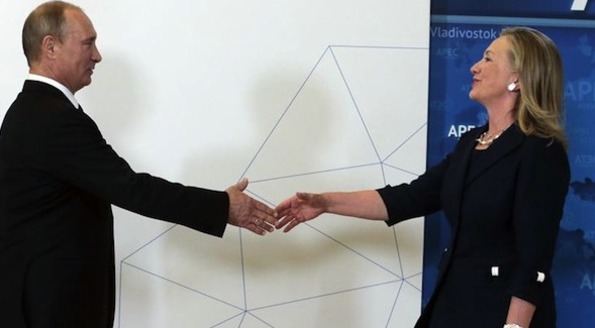 Both world leaders have been in the news of late: Hillary for her testimony on Benghazi, Putin for another shirtless ride on a horse through a shallow creek.

And since both can lay claim the claim of most interesting powerful person in the world, we figured we’d give them the treatment.

So... Who In the World Pays Less for Car Insurance: Hilary Clinton or Vladimir Putin?

First off, suspension of disbelief: Vladimir Putin clearly does not live in the United States. Instead he has established himself in Russia where he enjoys many dachas, apparatchiks and raw herring sandwiches. But for the sake of this showdown with Madame Secretary Clinton, we’ll just believe he lives in North Dakota, because of the similar clime.

Gender: Hillary has been voted the most admired woman in America for 17 of the last 20 years. Vladimir Putin is not impressed; he’s been voted the most popular man in Russia 21 out of the last 20 years! Lucky for democracy, car insurance showdowns aren’t popularity contests. Women pay less than men do for car insurance, and that is not up for debate. Advantage: Hillary

Age: Don’t let that botox around his eyes fool you, the Prime Minister is 60. The former first lady is 65, putting her at 69 next election cycle. Whether you feel that’s too old to run for President probably depends on how you feel about Hillary in the first place. The good news is that car insurance carriers don’t have feelings! They are pure rationalists and the data shows drivers are more risky to cover after they hit 65. Here’s a blog post and chart that prove it. Advantage: Vladimir.

Occupation: As of today Hillary is unemployed, which might be good for her celebrated sleep deficit, but not great for her insurance payments -- gotta show the carriers you can pay the bills! For his part, Vladimir Vladimirovich Putin is the leader of the Somewhat-Free World, and that might mean there are people who want to kill him, which would be bad, especially on the highway around other cars. Advantage: Tie.

Education: The former Senator from New York graduated from two of America’s most hallowed institutions: Wellesley College and Yale Law School. Putin’s academic record is also impressive; he graduated from Leningrad State University in 1975, where he then also received a PhD in International Law. Sure a few pesky communist sympathizers -- I mean bloggers -- have pointed out the much of his thesis was plagiarized, but who cares? In the car insurance world, when it comes to education metrics, you are your degrees. And then there were those 16 years he spent in the KGB... Advantage: Putin.

Vehicle: Putin recently announced that he was renouncing all foreign cars for the Russian-made ZiL-4112P. Truth be told, this ride, though cool, isn’t even on our platform. Now that Hilary is a civilian again, she’ll be back behind the wheel of her Mercury Mariner Hybrid. The Mariner has a pretty high CoverHound Insurance Over Sticker score of 11.8% (the average vehicle is 9.6%), but we’ll give her the benefit of the doubt since at least her car registers on our platform. Advantage: USA!

Family Status: Only Bill and Hillary know what really goes on inside their relationship. From the outside we can only guess they’re still married. Prime Minister Putin’s marriage is also known to be... unconventional, though in his case he seems to be the catalyst, not the bystander. Unable to see shades of gray, carriers only care about legal distinctions. World-historical socio-political fallout aside, divorcing would cost both of these world leaders a 29.2% jump in auto coverage. Both unions have produced children -- daughters: Chelsea, Mariya and Yekaterina (guess which family they belong to) -- so both enjoy the additional savings having loved ones in the back seat. Advantage: Tie.

Credit Score: Between books tours and speaking engagements the Clintons have amassed a fortune of more than 109 million American dollars. While that might sound like a lot to you and LeBron James, that’s coffee money for the Prime Minister whose personal fortune is rumoured to be north of $70 billion. That wealth derives largely come from his partial ownership of transnational Russian oil and gas concerns -- but that will do it! And, as we all know, having more money doesn’t mean you pay all the bills (ask one Busey, Gary), but in this case it seems like Mr. Putin might even own the credit agencies as well. Advantage: Putin.

So Putin pays less for car insurance. Now the real question: Which one would you rather be?