An Exclusive Interview with Big Daddy, Insurer of the World's Top Athletes 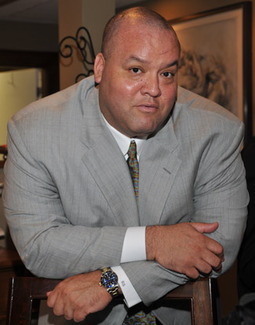 Ever wonder to whom athletes turn when they want to take out those fancy Lloyd’s of London insurance policies on their world-class body parts? The answer for most is simple: Richard “Big Daddy” Salgado.

The man and the myth were kind enough to sit for an interview with CoverHound.

How did you get started insuring athletes?

I started in 1994, when I played college football at the University of Maryland. I met so many people that worked in the NFL as I was growing up that a niche market was set in place for me.

Around how many athletes do you work with now? And what kinds of insurance do you help them out with?

Since I started in '94, I have worked with more than 500 professional athletes, TV personalities, media members, CEO's of major companies, etc. I work with the NFL, NHL, NBA, MLB and now might be venturing into MMA as well as boxing. I do life insurance, career-ending disability insurance -- and other policies. We are a full insurance consulting firm.

How would you rate the NFL's insurance policies for current players? Are things like health insurance issued league-wide or through the team?

The policies are sufficient and they are issued league wide but changes may come due to retired players not being covered or not being able to afford insurance after their playing days are over.

How does it work with athletes and Lloyds of London? In a previous article I suggested that many of those were for publicity -- like Troy Palumalu and his hair. Are those legit? Set the record straight.

They aren’t for publicity; real parts are insured. I have one client that is painter and insures his hands. As well as a hand model. Everything is a case by case.

If I'm a stud high school basketball player, and want to take a $5 million policy on my knees for the next 3 years, what am I looking at ballpark as a monthly payment from Lloyd’s of London?

What's the craziest thing you ever insured?

I don’t get that many crazy requests for insurance and all cases are interesting because sometimes they mean a whole lot more than just insurance. I have insured my mailman, my hometown pizza parlor.

If you could teach a young athlete anything about insurance what would it be?

Insurance is very important. It can be used for protection; it can be an asset; it can protect your family, your future sports contracts. You can do a lot with insurance if it's used correctly and if the correct products are purchased. Another thing to teach athletes, LET THE INSURANCE PERSON teach and guide you. Too many other people try to stick their noses in the picture, and those folks aren’t qualified or licensed to do so.

Have to ask: How'd you get the nickname Big Daddy?

I got the nickname in college from a former teammate of mine who was 6'8 350 pounds.

I also owned a clothing company called BIG DADDY GEAR. I was a partner in this for a while then got into insurance.

To learn more about Big Daddy and his business check out his site and his vids on YouTube.