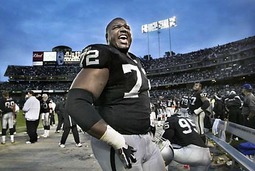 For most athletes the biggest question at the end of their careers is what to do next. Some become coaches; others re-appear as talking heads on ESPN. A good number spend all their money, while a small few manage to leverage their on-field success to become even wealthier. The story that’s not often told, however, is that of athletes who make pragmatic decisions to launch second careers, far away from the field.

After getting named a first-team All American at the University of Washington, Lincoln Kennedy had a long football life mapped out in front of him. And he didn’t fail to disappoint, playing 11 years for the Atlanta Falcons and Oakland Raiders -- taking the field in three Pro Bowls and Super Bowl XXXVII.

But even after playing in the NFL for more than decade, Kennedy left the game at 32, an age when many people of his generation are first figuring out what they want to do. According to data collected by Sports Illustrated, 78% of all NFL players are in financial distress within only two years of retiring. So then what was does an engaging, 6’6” 350-pound millionaire do for an encore? Sell insurance, of course.

“I like being in charge and one way of doing that is being in business for yourself,” says Kennedy from his office in Phoenix. In business he chooses to leverage his personal brand, “I present my customers with the phrase ‘All-Pro protection and service you can trust.’ Besides... Raiders fans they just like me being their agent.”

With the large amounts of money that athletes spend to sustain their lifestyles and inner circles while still playing, on top of the heavy tax burden, it should come as no surprise that many former pros are turning to practical, steady careers that could provide a safety net for their families and themselves. And if Johnny Unitas could file for bankruptcy -- he did so in 1991, citing $3.5 million in debt -- then anyone can.

For Rick Mirer, the vineyards of Napa Valley seemed a lot more than 3,000 miles from the flood lights of Madison Square Garden, where he was selected second overall in the 1993 NFL Draft. But like Kennedy, the Notre Dame grad knew his quarterbacking career (and earning power) wouldn’t be around forever.

“I started thinking about post football when I was in Napa for training camp with the Raiders. I wasn't sure how much longer I was going to play, but I knew I enjoyed wine. I was curious about the business and a few years later I found myself knee deep in it,” Mirer said from his office north of San Francisco.

One big difference between the two practical career arcs is that Lincoln Kennedy has opted to leverage his personal brand, outwardly -- while Mirer has decided to put the company brand out in front of his own.

“My personal brand has opened a few doors, but our plan was for Mirror Wines to be a serious wine that the wine community appreciates more than a play on my past,” Mirer says.

This is a decision many athletes have to face in the office place, where bringing attention to oneself can certainly help via awareness and networking, or hurt through added pressure and scrutiny.

With reports of so many athletes filing for bankruptcy after earning dozens -- if not hundreds -- of millions of dollars during their playing days, we should be seeing fewer and fewer “Where are they now?” stories, and instead place a greater emphasis on how former athletes got where they currently are, and which of their successes we can replicate.