Where Car Insurance Costs The Most 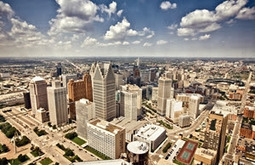 NerdWallet recently revealed its list for the costliest cities for car insurance in the U.S. Car insurance premiums depend on several factors, including your age, gender, vehicle type and driving history, but where you live can also play a role in how much you pay for for a policy. All these factors are used to determine how much of a risk you are to an insurance company.

For example, if you have a history of receiving several speeding or parking violations, it is likely that you will get more in the future and have a greater risk of getting into an accident. A driver who has a perfect driving record and owns a hybrid, on the other hand, is considered to be a safer bet, because they are less likely to file an insurance claim.

Detroit - Ranked as the most expensive city for auto insurance by NerdWallet, the average rate for a policy in the Motor City reached $10,723.22 for an annual premium. That's more than 10 times the average annual policy than in the city with the lowest average, Greensboro, N.C. In the city known for manufacturing cars, drivers pay more because of state laws and a high crime rate. Michigan's no-fault insurance system does not put a cap on claim awards, which has made policy rates rise rapidly over recent years. The insurance system does intend to cover litigation costs by providing prompt returns on medical expenses, any lost wages and property damage replacement. However, the downfall of not capping claims has led to a system that makes it tough for drivers in certain parts of the state to get affordable car insurance.

New Orleans - Following Detroit, New Orleans has the second most expensive car insurance rates, though the average is half that of the Motor City. The average annual premium in the Louisiana city is $4,309.61 - a bargain compared to Detroit. Poorly maintained and aging roads in the city are a major source of vehicle damage and have contributed to higher insurance rates.

Grand Rapids, Mich. - The third most expensive city for insurance is also located in Michigan. Grand Rapids boasts an average annual premium of $4,042.42 for auto insurance coverage. While Grand Rapids is not nearly as large as Detroit nor has as many automobiles, the state's insurance law and winter-ravaged roads have made it an expensive place to drive. The Midwest winter typically wreaks havoc on Michigan streets, resulting in potholes that can cause severe damage to vehicles.

While where you live will influence how much you pay for car insurance, there are options out there for every driver. Taking the time to shop around for the right policy will ensure that you find the right coverage to suit your needs.