What To Know About Frozen Pipes 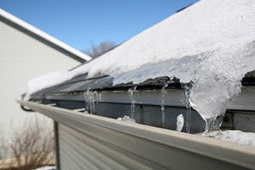 Following one of the coldest winter storms in history, many Americans experienced water damage after their plumbing pipes froze and burst. While water damage and burst pipes are an unfortunate event that can cause a lot of inconvenience, most homeowners insurance policies do cover water damage. However, it is important to check your policy for water damage as a result of a flood. To protect your home from water damage, there are a few things to know about frozen pipes during the winter:

Why pipes burst
If you've ever put a can of soda in the freezer, you know that water expands when it freezes and if you forget about the can, you will have an explosion of icy soda to clean up. Regardless of the strength of the container, expanding water will burst whatever is holding it. Pipes that carry water are vulnerable in the winter and can explode when the water inside freezes. However, it is typically not the part of the pipe where the blockage occurs that explodes. Instead, pressure downstream of the blockage will increase the pressure to the point that the pipe explodes. Pipes that are not adequately insulated or protected throughout their entire length are the most vulnerable to freezes and ice blockages.

According to the Weather Channel, homeowners should monitor their plumbing when temperatures drop below 20 degrees. Homes in the southern states may be more susceptible to sudden temperature changes in the winter, contrary to what homeowners might believe. Because northern states are likely to have colder winters, builders typically will keep plumbing indoors and insulated. However, in milder regions, temperature drops are less likely and pipes may be placed outdoors, leaving them more vulnerable to changing conditions.

Prevention
There are a few things that homeowners can do to reduce the risk of having their pipes burst and protect their property from water damage. Before the winter hits, homeowners should drain water from outdoor hoses and swimming pools. Antifreeze should not be added to water supply lines unless specifically directed, as it can be potentially harmful to humans and animals. Valves to outdoor water supplies should be closed before temperatures begin to fall indoors, but outdoor valves should remain open.

A homeowner should also take time to inspect areas of the home where vulnerable pipes could be exposed, such as in the attic, garage, basement or crawl space. In these areas, pipes for both cold and hot water should be insulated. If there are pipes that are not insulated, consider buying pipe sleeves, heat tape or heat cables to protect water lines. Getting pipes checked out by a professional can also help ensure that a home is better protected for winter as well.