What Does Over Packing Your Car Do? 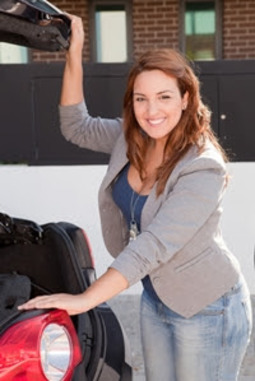 Sometimes you just have to pack your car from top to bottom. You squeeze luggage and boxes into every nook and cranny you can find and figure if your back window is blocked, you have your side mirrors. But what does all of that extra weight do to your ability to drive and your car's ability to run efficiently?Safety first
Chances are we've all relied on our side mirrors to drive when the back window isn't available, but this should be avoided at all costs. Your visibility is drastically decreased and your side mirrors can't make up for the loss. Not being able to see behind you means you're more likely to miss a car or a child in your blind spot, according to Consumer Reports.

Stacking luggage and boxes in the back seat is also dangerous for the driver and passenger. People in the back seat are buckled in to avoid moving forward during an accident but boxes aren't. If you're in a collision, those boxes can fly toward you at high speeds.

Pack smart
With safety in mind, don't pack anything above the top of your back seat, Western State Insurance advised. If you're tempted, just remember that you could be the cause of an accident, which could raise your auto insurance rates and hurt someone.

You might worry about being able to pack light, but stick to taking only what you need and leave out the extras, whenever possible. If you're moving apartments or homes, consider renting a cargo van so you don't have to rely on the limited space of your car.

Always think about which objects could move around in an accident. Put your heaviest suitcases or boxes on the bottom of the stack closest to the floor. Heavier items on top can be more dangerous in a crash. Lighter objects on top will hurt the driver and passenger less if there's an accident. Also, try and strap down as much as you can, Consumer Reports advised.

Economic considerations
Packing a car inside and out adds a lot of weight to the vehicle, which means the car's engine and tires have to do more work. In addition to being heavy, items on top of your car increase wind resistance. Both the weight and the drag will lower your engine's efficiency, according to the U.S. Department of Energy.

Less efficiency means you'll spend more money on gas. An extra 100 pounds in a car can lower fuel efficiency by 2 percent, the DOE stated. A large roof-top cargo box can reduce your fuel economy anywhere from 2 to 8 percent if you're driving around a city or 10 to 25 percent if you're going 65 to 75 mph on a highway. Ultimately, you'll be stopping a lot more for gas to get to your destination.

That extra weight and drag also puts more pressure on the tires, which will wear down faster than if the car wasn't moving around all of the suitcases and boxes. Not only will your gas bill increase, you'll be purchasing a new set of tires sooner.