What Aggressive Driving Does To Insurance Rates 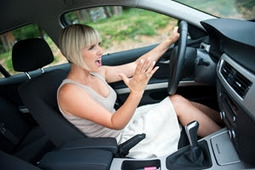 We've all seen them on the road - that driver dangerously swerving through traffic across several lanes or cutting off another. There are a number of factors that auto insurance companies will take a look at to determine the price of your policy, premium and deductible, but it can be significantly influenced by the type of car you own and your driving habits. Specifically, aggressive driving can cost you an arm and a leg in car insurance expenses, compared to what your rate could be with safe or defensive driving habits.

So how do insurance companies know what type of driver you are?

To start, they will take into account what type of car you drive. According to Fox News, if you're an owner of the Nissan GT-R Track Edition, which rings in at $110,000, you are likely an aggressive driver set on flying through the streets. Insure.com ranked this vehicle as the most expensive car to insure in the U.S., coming to a total of approximately $3,200 over 12 months.

The reason this car is so expensive to insure is not its flashy style - though the repair costs may be higher - but because of its quick acceleration and high price tag. In short, insurance companies are able to profile what type of driver owns a vehicle like the Nissan GT-R. The car is purchased almost exclusively by people who want to drive fast, which significantly increases the risks of getting into an accident.

Why it happens
You might think you are a safe driver most of the time. Even if you have never had a ticket before, there is still a chance you have engaged in aggressive driving from time to time. It can happen as a result of simple traffic occurrences or if another driver does something that angers you. Even small acts such as flashing your lights to the car ahead, cutting someone off or not allowing another car to safely pass you are considered aggressive practices that could result in more serious consequences.

To avoid these behaviors, be sure to remain calm on the road when dealing with other drivers. Just remember there are more dangerous hazards that can happen from acting in an aggressive manner. You could even end up with a serious ticket that will raise the price of your car insurance rate or get into an accident and have to file a claim. To save yourself and your finances, refrain from aggressive habits on the road and consider taking a safe driving course. You might even be able to get a discount on your policy if you take an advanced driving course.