Want To Have Cheaper Car Insurance? Get Married 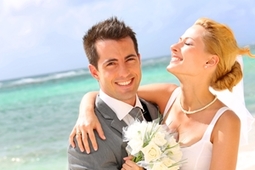 The ring on your finger may not be the only new addition after finally tying the knot, as many newlyweds are rewarded with the wedding-day gift of cheaper auto insurance as well. Throughout your life, every major milestone is typically accompanied by an adjustment in insurance rates. As such, it may behoove you to think about how major life changes will affect your finances and perceived risk on behalf of insurers.

If you're young and in love, it's more likely your car insurance rate will decline the most compared to getting married at other stages of life. That's because drivers under the age of 25 are considered riskier investments and require greater price tags to insure, though sometimes through no fault of their own.

Insurance companies typically quote customers based on their associated group profiles. By looking at historical data and current trends related to particular cohorts, insurers are able to assess just how much drivers of each age group should pay. As a younger driver with less experience and greater susceptibility to engaging in risky behaviors like texting and drunk driving, it's not hard to see why insurance providers are likely to charge you more for the same amount of coverage as an older person.

The way around this, however, could be located at the altar.

Shared risk
Even after the age of 25, you're likely to still pay high car insurance rates. But, in the eyes of insurers, being a married driver is much more preferable than being single driver.

Not only will insurers look at your own driving record, but also that of your spouse, and if they like what they see, then a rate reduction may be in the cards. Rather than relying on the good faith and driving ability of a single driver, insurance providers are able to glean a more complete picture of your overall trustworthiness based on the totality of you and your spouse's history.

As a result, younger drivers who get married usually pay lower rates because they are viewed as more responsible and grown up compared to their single counterparts. And with less uncertainty and risk involved, there is not as great a need to charge you higher premiums any longer.

Not all discounts are guaranteed, which is why it's important to speak with an insurance agent to secure the cheapest rates.