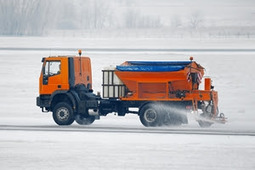 As cars get more advanced and are outfitted with innovative technology, it is likely that vehicles of the future will be able to drive themselves and communicate with others on the road wirelessly. While fully automated vehicles have yet to hit the market, some of these technologies are about to make their way to the streets.

Volvo Car Group is one such company utilizing mainstream technology to make roads safer. Volvo has teamed up with the Swedish Transport Administration and the Norwegian Public Roads Administration to launch a pilot program of vehicles that use the cloud for car-to-car communication.

Cars that talk
The communicative technology would allow vehicles to "talk" to one another and relay important information about the road, such as ice conditions and the distance between other drivers. The car2car communication program will likely reduce the number of accidents related to road conditions. After experiencing one of the harshest winters in history, drivers in many regions of the U.S. would likely embrace the idea wholeheartedly.

The communications between vehicles could alert drivers to upcoming obstacles and give them more time to react, or autonomous cars would be able to react without human control. Using mobile phone networks already in place, a vehicle could alert the one behind it that there is an ice patch coming up. A driver would see an alert among their instruments.

"The pilot is one of the first practical examples of the way communication between vehicles over the mobile network enables vehicles to 'speak' to each other and with the traffic environment," said Erik Israelsson, project leader for Cooperative ITS (Intelligent Transport System) at Volvo. "This can contribute to making traffic safer."

The technology would also let other vehicles know how fast another driver is going and assess any situations that could be potentially dangerous.

Broader uses
Beyond individual car owners, the use of the technology could also make cities more efficient when it comes to dealing with winter road conditions. Specifically, road maintenance could be alerted to hazards sooner if they were connected to the cloud.

"When the road administrator has access to information from a large number of cars, the data can be used to make winter road maintenance more efficient," Israelsson said. "The information could help to improve road safety further for all road users. This could also reduce the use of salt when not needed and minimize the environmental impact."

While there is no telling what car2car communication could mean for auto insurance rates, it is likely that drivers might be safer and eligible for savings with the technology.

The Scandinavian program is just the beginning for Volvo, which plans to extend the network of car2car communication over the next several years before bringing it to its customers.

"This is only the beginning. In the future we will have increased exchange of vital information between vehicles," Israelsson said. "There is considerable potential in this area, including safer traffic, a more comfortable drive and an improved traffic flow."