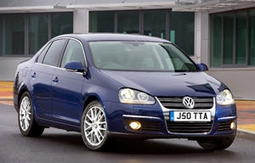 Volkswagen became aware of the issue after an investigation in China was launched two months ago, according to The Wall Street Journal. The manufacturer is also recalling thousands of vehicles for the same issue in China and Japan.

After inspecting more than 40 vehicles, Volkswagen believes the issue arises not from a defect in the structure or components of the car, but from a failure to have the axles inspected well after an accident and repaired if necessary, the Journal reported.

A precautionary measure
While Volkswagen issued a recall, it stands by the fact that there is no technical reason behind it. The proactive measure is to reassure customers their vehicles are safe to drive.

Volkswagen has instructed its dealerships to inspect cars that have been in rear-end or side-rear collisions for damage to the trailing arms. For vehicles without any damage to the part, the dealership will fit a sheet metal inlay on the rear trailing arms, which will give off a distinctive noise if later damaged in an accident.

According to the company, no injuries related to the issue have been reported.

Consumers who own a Volkswagen potentially involved in the recall should take their car to their dealership for a full inspection. If any necessary repairs need to be done to the vehicle, people should work with Volkswagen and their auto insurance carrier to cover the cost.