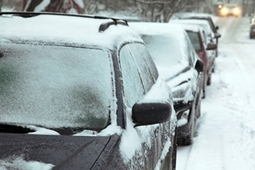 The winter season typically sees a rise in drivers warming up their vehicles in the morning before embarking on their morning commutes. This common practice has long been a staple of cold and weather-weary drivers looking to get a little warmth in the depths of bitter winters. However, drivers may be putting their vehicles at risk of theft when they leave them unattended - even if only for a few moments.

Recent car thefts in several cities around the U.S. have brought to light just how easy it is for criminals to make off with cars that are left running in the morning. In Illinois, the Cook County courthouse issued a warning to all drivers in the region to be mindful of car thieves during winter after cars were repeatedly being reported missing on Feb. 18, according to DNAinfo Chicago.

In one case, a woman's car was stolen from her driveway as she was warming up the vehicle. In another, a man hopped out of his car to enter a grocery store for just a minute and turned around to find someone driving away in his vehicle.

Cases such as these are becoming more common this winter, particularly in northern areas hard hit by cold temperatures.

NBC-affiliate TMJ4 in Milwaukee, WI reported more than 30 cars were stolen between Feb.16 and Feb. 18, with 15 unattended cars taken in a three-hour time frame on the morning of the 16th. Thieves were specifically successful during the morning hours when drivers were warming up their vehicles.

Combating auto theft
FBI data indicated a car was stolen every 45 seconds in 2013, according to the Insurance Information Institute. Today, with advanced security features on many newer models, cars are more capable of foiling the plots of thieves than ever. However, not all people take advantage of safety precautions or even simple measures to prevent theft.

Leaving cars unattended during winter makes vehicles an easy target for thieves. A few minutes of warmth is not worth the hassle and expense of a stolen car, so drivers should be especially careful this time of year.

There are a number of things that drivers can do on a daily basis to combat theft, including using remote starters and steering wheel clubs, according to TMJ4.

Further, etched vehicle identification numbers on windshields, engine immobilization software and key recognition systems are all great ways for drivers to protect their cars at all times. The good thing is that not only will cars be less likely to be stolen, but drivers can also be rewarded with a series of discounts from their auto insurance providers.

For example, many insurers offer discounts and rebates for drivers that install anti-theft devices because these drivers become less of a risk to insure. This makes insurance premiums cheaper and builds a working relationship between drivers and insurance companies.

This winter, drivers should combat auto theft and protect their vehicles at all costs by making smart choices.

CoverHound is a leading provider of insurance quotes for drivers in the U.S.