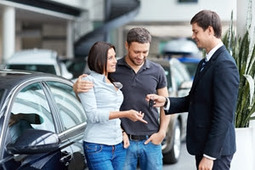 Owning a car is a financial strain - not only do you need a down payment to purchase the vehicle, you have to pay for gas, repairs, auto insurance and the loan payments. When money is particularly tight but you need a vehicle, you may be tempted to say yes to a long-term auto loan.

This new information balances out the good news that auto sales have been on the rise. It's great that consumers feel comfortable spending money on big-ticket items like vehicles. But, if they need to use a long-term loan, is it really a smart financial decision?

Professionals speak up
Bill Ford, Ford Motor's executive chairman, talked with CNBC and warned consumers and lenders that they shouldn't return to unhealthy spending habits. Ford believes everyone should be wary of long-term loans because they can over extend consumers and lead to higher delinquency rates.

Honda's executive vice president of sales John Mendel agreed long-term loans are more of a red flag than a sign of an improving economy, USA Today reported. Auto loans with these terms are a short-term tactics to improve car sales but could entice people into buying a new car they can't afford.

Issues down the road
Longer payment terms may mean consumers save on their monthly costs, which can go toward gas and auto insurance, but in the long run the owner will pay more in interest. In those additional loan years, the car could have major problems come up such as with the engine or transmission, and the warranty will probably have run out. Now they're paying high repair bills and loan payments at the same time.

Also, owners will run into issues selling their cars after a few years. They may want to sell their 5-year-old vehicle, but the price they're able to get may be less than what they owe on the loan or barely enough over for them to afford a car any better than the one they're selling.