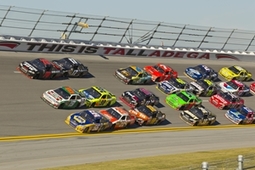 This week's news offered a story many never expected to hear: The White House is teaming up with NASCAR to promote tire maintenance and fuel efficiency.

Secretary of Transportation Anthony Foxx and NASCAR driver Ryan Blaney held a press conference to discuss the partnership. They pointed out that improperly inflated tires and low-efficiency tire options are holding Americans back from saving money at the gas pump. Incorrectly inflated tires also increase the risk of accidents on the road, which cause injuries and deaths. In fact, there are almost 11,000 tire-related auto crashes each year in the U.S., according to the White House.Secretary Foxx also announced a new U.S. Department of Transportation standard for tire fuel efficiency. The DOT plans to finalize the rule in 2017, which will create a new labeling requirement for tires, The Hill reported. The labels will use a rating system for replacement tires so consumers are able to gauge the benefits of the different options.

The purpose of the rating system isn't just to help consumers either, it's to reduce pollution. Improperly inflated tires use more gas, which increases emissions. Instead, if 10 million more Americans had correctly inflated tires, there would be 1.6 million fewer metric tons of carbon dioxide emissions every year.

Better tires, improved fuel efficiency and clean safety records may even lead to auto insurance savings for consumers as well.

What's NASCAR doing?
Under this partnership, NASCAR committed to launching a Drive for Safety initiative during the next racing season. More information regarding the program will be released as the 2015 season nears.