The State Of Uninsured Motorists In The U.s. 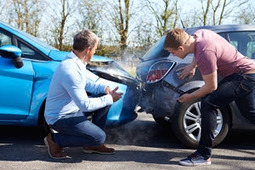 In just about every state, drivers are required to have auto insurance if they own a vehicle. In some cases, you need to show proof of insurance before you can even drive a new car off a lot after purchasing it. The case for having insurance is so strong, because millions of motorists can get into accidents and fender-benders on the road each year, creating damage and costly auto repairs.

Going without insurance may be illegal, but, in the U.S., there are many drivers who choose to forego coverage and risk being exposed out on the road. The effect on other drivers and insurance companies is pricey, which is why more groups are attempting to reduce the number of uninsured drivers on U.S. roads. However, regulations and laws haven't made much of an impact, a new study has found. While fewer drivers are uninsured recently, there hasn't been much improvement.

The impact of the uninsured
The Insurance Research Council recently released its latest report, "Uninsured Motorists, 2014 Edition," about the number of uninsured motorists in the U.S. The study monitored the trends of these motorists and the frequency of bodily injury claims from 2010 to 2012. The report found that in all three years, the percentage of uninsured motorists declined, though not much has changed since 2009, when the record high number of uninsured drivers reached 29.9 million. By comparison, 29.7 million drivers were uninsured in 2012, the IRC found.

The problem of uninsured drivers varied by state, but those with the highest numbers were:

While not much has changed over the last few years, there is a declining trend of uninsured drivers. However, the cost of these drivers has risen significantly. According to the IRC, $2.6 billion of uninsured motorists claims were filed in 2012 in the U.S., not including fatalities and total permanent disability claims. This translates to a 75 percent rise in this cost over the last 10 years. In 2012, the amount came to about $14 per person.

"Responsible drivers who pay for insurance end up also paying for injuries caused by uninsured drivers," said Elizabeth Sprinkel, senior vice president of the IRC. "The declining trend in the percentage of uninsured motorists is a positive development for consumers; however, the heightened levels of uninsured motorists and the rising claim payments involved still remain a concern for insured drivers, insurers and policymakers."

Some analysts have said that part of the reason the uninsured rate hasn't declined much is because of the state of the economy and employment level. While things are improving since the recession, there are still many Americans who lack cash flow, and they may choose to avoid the cost of auto insurance as a result.However, there are many ways to save on car insurance these days, which means all uninsured drivers should look into finding a policy that fits their budget right away. Using online comparison tools is an easy way to get a quote in just a few minutes.