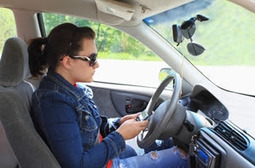 Shooting a quick text to a friend while driving may not seem like a big deal, but not paying attention to the road could result in drivers getting into an accident. There are several state laws in place that outlaw texting, and a report from the University of Alabama at Birmingham found that these restrictions are working.

Forty-four states ban the use of texting while operating an automobile, and 39 states have primary enforcement to ensure the prevention is working, according to the Governors Highway Safety Association. These measures seem to help reduce the number of accidents. Deaths are down an average of 19 per year in states forbidding people from using their phones. Holding off on texting when driving and avoiding citations can also help cut down on the frequency of drivers getting into accidents, which lowers drivers risk and could result in lowering the amount they have to pay for auto insurance.

Alva Ferdinand, the head researcher of the study, said that these laws are creating safer drivers, especially among the younger ones.

"Primarily enforced texting laws that banned only young drivers from texting were the most effective at reducing deaths among the 15- to 21-year-old cohort, with an associated 11 percent reduction in traffic fatalities among this age group in states with such bans," Ferdinand said in the report.

The report showed that some states have outlawed all texting while driving, while some others only forbid young drivers from doing this. The laws differ from state to state, with some only having secondary enforcement. With primary enforcement, an officer can cite a driver specifically for texting, but officers need another reason to stop the driver under secondary enforcement.

Ferdinand said states with secondary enforcement did not show the same significant decreases in roadway fatalities compared to those that allow primary enforcement.