Texting And Driving Still A Problem 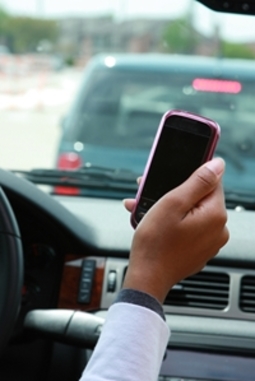 The instant communication brought on by the growing digital age keeps people united, but the use of mobile devices by distracted drivers is tearing us apart. More and more laws are being passed that prohibit drivers from texting on the road. According to the Governor's Highway Safety Association, all but six states have hopped on board the no-texting bandwagon, and results are varied. While 50 percent of teens admit to texting while driving according to the American Academy of Pediatrics Journal, the Journal of Public Health determined that texting bans have decreased motorist mortality rates by three percent. Laws have contributed a major impact to this decline, but efforts coming from cell phone companies and a concerned society are also seeking change.

Campaigns
Cellphone carriers are doing their part to stop distracted driving. AT&T's It Can Wait Campaign sets out to educate commuters on the dangers of texting while operating a vehicle. The campaign encourages drivers to take the pledge to never text on the road. The effort also invites community and organization leaders to join the cause and share relevant information with friends and family. In 2013, Verizon, Sprint and T-Mobile joined forces with AT&T to support this campaign.

From the health side of the issue, The American Academy of Orthopaedic Surgeons has teamed with The Auto Alliance in a "Decide to Drive" campaign against motorist distractions, especially texting. Their website offers educational tools for those seeking to change their own behaviors and resources for those worried about the habits of their friends or family. The campaign uses social media platforms to keep this issue a topic of discussion.

Concerned citizens
In a study cited by the American Council on Science and Health, there are 3,000 teen deaths annually resulting from texting and driving. The parents and families of those teens probably know better than anyone the dangers of texting and driving. Their stories are what spark the need for campaigns and laws against mobile device use on the road, not to mention the sense of community they can provide for each other.

Mothers Against Drunk Driving is an example of how passionate people can make a difference. Though this organization is about drinking and driving, it goes to show what a community effort can do. According to their website, since MADD began, the number of deaths per year from drunk driving has been cut in half. With success stories like these, there's no wonder that the rising death toll for texting and driving is also fueling these campaigns.

Mobile Applications
If you're more focused on fixing your own driving habits than joining the movement, there are numerous mobile apps that help eliminate distractions. For instance, the tXtBlocker application allows users to set up no-texting zones and times for phone calls to be automatically sent to voicemail and text message alerts to be silenced. Instead, those texting you will receive an automatic text message that lets senders know you are unavailable.

Textecution is a mobile application more helpful to those with less predictable driving schedules. When the phone hits 10 mph, like when it's sitting in a moving vehicle, it disables the phone's texting services.

Of course, simply turning the device off before driving is just as effective, but some mobile device users want to show a little more courtesy to those trying to text them. The Android application Live2Txt silences all call and text alerts, but like the tXtBlocker app, an automatic message is sent out to senders. The unique part about Live2Txt is that you can customize that automatic message.

Some insurance companies offer lower rates for safe driving, and avoiding texting and driving is one way to prevent an accident. Be sure to review your insurance policy to understand the consequences for distracted driving. CoverHound's easy-to-use website offers a wide range of options for auto insurance.