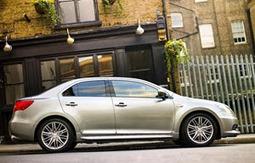 It's the news arachnophobes never wanted to hear: Their car may be part of a recall based on spiders.

Suzuki Motor of America, Inc. is recalling 19,000 2010-13 Kizashi sedans because spiders are so enticed by the gasoline vapors, they crawl into the vehicle's equipment and build webs, which disrupt ventilation. Once the webs have become too thick, they can block airflow to the point of creating negative pressure in the fuel tank. This negative pressure leads to cracks and leaks, which increases the risk of fire. However, no injuries related to this problem have been reported, according to the U.S. National Highway Traffic Safety Administration.

This isn't the first time vehicle owners have dealt with a problem because of spiders. Since 2011, Mazda has twice recalled its Mazda6 because of spiders building webs in ventilation hoses, according to Reuters.

If you own a Kizashi and are worried spiders may be putting your car at risk for catching on fire, you should do two things. First, have a Suzuki dealership or your mechanic check if you're vehicle is part of the recall. The affected cars were manufactured between October 2009 and July 2012. Second, make sure your auto insurance would cover any damage caused by the spiders' webmaking.

The problem is remedied by installing a filter on the ventilation line, which keeps the spiders out. If the mechanic finds your fuel tank has been affected by the spiders, your fuel tank will also be replaced for free in addition to the filter. The repairs to fix the defect are free, but it's always safe to check that your auto insurance will cover any other damage not paid for by Suzuki.