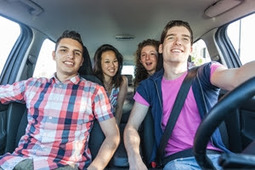 Liberty Mutual Insurance and Students Against Destructive Decisions recently conducted a survey about teen driving, revealing there are some major discrepancies between what teens consider to be risky driving and what they actually do on the road. The survey also revealed that a large percentage of teens reported that their parents engage in risky behavior behind the wheel, which is likely to be repeated by teens.

When teenagers get their license, they are likely to have high auto insurance rates, as these drivers are seen as a higher risk. There are a few ways to cut down the costs, including getting good grades or taking an extra safe-driving course. However, the latest survey might reveal that teens' lack of understanding about safe driving could be setting them up for potential hazards.

"While many teens seem to have gotten the message about these driving dangers, the real challenge is to make sure they understand that even a sip of alcohol or a quick text at a red light can be deadly," said David Melton, a Liberty Mutual Insurance driving safety expert and global safety managing director. "Teens need to realize it's not acceptable to put an allowable limit to their engagement in these behaviors - they need to be eliminated entirely when they are behind the wheel."

While a designated driver can be a good alternative to driving under the influence, the term took on a different meaning among teens. The result showed that 21 percent of teens said they define designated driver as "basically sober" while 4 percent said this driver was the "least impaired."

These lax definitions are cause for concern among parents and advocates for safe driving, but they pose a good opportunity for parents to have a discussion with their teens about what safe driving really means.