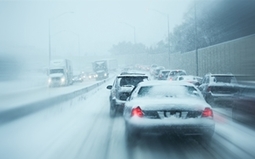 Though some parts of the country are already experiencing an early transition into the mild temperatures of spring, other regions are still buried under mounds of snow, which doesn't bode well for drivers on their commutes. One of the more common issues regarding heavy snowfall is that drivers wake up the next morning and don't have time to fully remove the blanket of snow covering their vehicles. Some may settle for simply clearing windows and mirrors, but even this approach doesn't do justice to other drivers on the road.

The problem has become so widespread this winter season that drivers have had to veer off the road to avoid getting hit by snow and ice that slides off the backs of cars in front of them, according to NPR. As such, Pennsylvania lawmakers are taking up legislation to consider imposing fines upwards of $75 on drivers who do not remove snow from their cars before hitting the road.

Policemen would be able to issue tickets, hopefully with the effect of curbing driver behaviors that can potentially lead to accidents and even death. One Pennsylvania driver, Mike Taylor, highlighted his concern with negligent drivers not taking others into consideration, NPR reported.

"Snow on the roof blew off, hit my windshield, forced me to jiggle, and it was only because of the stability of the car and [that] I slowed down that I didn't have an accident," said Taylor.

The snow removal issue illustrates just how important it is that drivers take every precaution necessary during winter to prepare their cars for the road. Here are additional ways drivers can ensure their safety and the safety of others during winter:

Make sure the defroster works
Removing snow to increase visibility is only one part of the winter driving battle. In fact, once drivers are inside the car, the heat and moisture inside the vehicle combined with the cold temperatures on the exterior creates excessive fogging, making it very difficult for drivers to see clearly. That's why it's crucial defrosters are in working order and that drivers are able to avoid fogging up their windows.

Keep scrapers handy
In a matter of minutes, snow and ice can form on windows and car locks, and drivers could be left without a way to clear their vehicles. By keeping a snow scraper tucked away in the car, drivers can quickly remove visibility inhibitors without having to rely solely on defrosters to melt away the winter elements.

Install winter wipers
Windshield wipers naturally degrade over time, and winter is the worst time to have a poor-performing wiper. Rather, drivers should purchase winter wipers, which are more durable and designed to handle harsh winter conditions. With these new upgrades, drivers can ensure their vision isn't obstructed, making commutes all the more safe.

Avoid close driving
Though individual drivers can do a lot to keep their vehicles in top shape, it's all for naught if a driver up ahead still has ice and snow covering his or her vehicle. If a chunk of ice became dislodged and smashed into a following vehicle, an accident may occur. That's why it's best to keep a safe distance from the car in front. This will minimize the chance of significant damage occurring to windshields, thus keeping drivers collectively more safe on the road.

For drivers concerned about potential winter-related accidents, an updated auto insurance policy can help ease some of these worries.

Contact CoverHound for the latest real-time insurance quotes and information on how to save on monthly premiums.