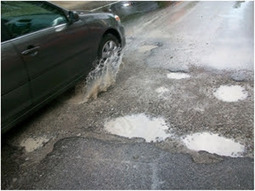 During the winter, other than slipping on ice and bearing through a blizzard, drivers need to watch out for dreaded potholes. Often hard to spot until it's too late, even small holes in the road can cause big damage to your vehicle. When it comes to car insurance, many standard policies don't come with pothole protection, leaving some drivers out in the cold to cover the costs out of pocket.

Auto insurance may cover other effects of winter weather, like getting into an accident after slipping on ice. But not all of winter's woes are covered. Potholes are formed when water gets under the pavement and freezes. Because ice expands, it can create cracks in the road. When the ice is gone, the pavement collapses and create a hole waiting to lure in innocent drivers. Fortunately, there are several things drivers can do to avoid damaging their vehicles from potholes.

Slow down
It may seem obvious, but the faster you drive, the more damage you can cause to your vehicle when it comes to potholes. No, you will not fly over a pothole like Superman because you are zipping along. If you spot a pothole, slow down to minimize the impact and crunch. Be sure not to brake completely, though, as you could get stuck or cause someone to rear-end you.

Go around
If it's possible, avoiding a pothole entirely is your best bet. Don't drive into oncoming traffic or swerve dangerously into another lane to avoid it, however. Slow down and try to steer around the pothole.

Don't tailgate
Some drivers consider themselves tailgaters. These people might think of themselves as go-getters, hoping to get where they are going faster. In reality, drivers who ride too closely to another car are actually putting themselves and their vehicle at risk. If the car in front of you hits a pothole, you will have enough time to observe and react to avoid damage if you are far enough away. Drivers who are directly behind the car in front of them probably won't have any time to react and could end up running right into a pothole or other obstruction.

Hold tight
Sometimes there is no avoiding hitting a pothole. You may not ever see it coming, or be going too fast to react in time. If you know you're about to be jolted by a minor impact, brace yourself by holding onto the steering wheel tightly. Sometimes a pothole can send a shock that can knock a driver's hands off the wheel, causing it to jerk to either side. This can be dangerous and cause even more damage if you hit something else. Keeping a firm grip on the wheel will help prevent this.

Check your insurance Potholes will inevitably crop up during the winter season if there is lots of freezing and unfreezing on the roads. Check with your car insurance company to see if you are covered for pothole damage. If not, you may want to consider getting additional coverage to avoid paying for repairs all by yourself.