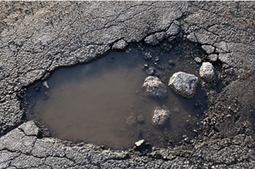 Drivers all over the nation, and especially in regions with colder climates, are witnessing potholes on the streets and highways. Each year, the winter months do a lot of damage to roads because of snowplows, salt trucks and the temperature change. These factors make potholes grow, which ultimately can do more damage to your car if you're not careful, AAA Alabama Spokesman Clay Ingram told FOX affiliate WBRC based in Birmingham.

"You get those freezing temperatures, that expands [the] water," said Ingram. "And if you've got the start of a small pothole, that will immediately start to make it bigger and bigger."

Make sure your insurance protects against potholes
Depending on the amount of damage done to your vehicle, you could be able to report the repairs from a pothole to your auto insurance company, Radio Iowa reported. However, your insurer could possibly raise your premium without intensive documentation that shows you were not at fault.

"The damage done to your car would generally be covered under the collision portion of your insurance," said Ann Avery, a spokeswoman for State Farm, according to the source. "These kinds of repairs from damage caused by a pothole can cost on average anywhere from $300 to $700. My best advice would be, if you have questions about the damage and whether it would be covered, consult your insurance professional and find out what your coverage is in this circumstance."

Auto shops working around the clock on repairs With potholes mostly affecting drivers in the wintertime, numerous auto mechanics are busy with repairs to suspensions and tires. According to CBS affiliate KOLN based in Lincoln, Nebraska, many auto shops are constantly answering their phones to give estimates on damages from potholes.

Jared Mcpike, co-owner of InMotion, an auto damage repair shop, said there have been cars with minimal and major damage come into his shop because of potholes, the source stated. He said the a minor damage would be if you just popped your tire. In that instance, all you have to do is replace your tire, which costs around $100 to $200.

However, the mechanic said some vehicles bend their rims when they hit potholes, which can cost up to $2,500 to repair. Mcpike's advice is to check your car immediately if you think you hit a pothole to see if there's any damage.

What to do to avoid pothole damage
A recent report from AAA said that in 2014, more than $6.4 billion was paid in vehicle damages to drivers because of potholes in the U.S. On the plus side, there are some extra measures you can take to make sure you're not spending all your money repairing your vehicle from pothole damage.

Properly inflate your tires: It's absolutely essential to make sure your tires are inflated to the correct pounds per square inch (PSI). According to WBRC, Ingram said people should give themselves extra protection by properly inflating their tires. What this does is limits damage from impact to the tire from the rim. Without the correct amount of air, your rims are more likely to puncture your tires.

Drive slower: If you're in an area where ice and snow are a regular occurrence on your roads, you should limit your speed anyway. However, when you drive slower, you can spot potholes easier, and if you can't avoid them, lower speeds will limit the impact on your car, AAA reported. Additionally, if you see cars ahead of you slowing down, stopping or swerving, you should decrease your speed as well and be on the look out for craters in the road.

Invest in bigger tires: If you're searching for a new car, you might want to go bigger as larger tires often succumb to pothole damage a lot less than smaller cars, WBRC reported. Some retailers sell winter tires, which are able to handle the winter conditions a lot better than standard tires. Most of the changes you can do simply depend on the type of car you own.

Potholes are hard to avoid and sometimes simply impossible not to hit while driving on faster roads or areas with a lot of traffic. According to WBRC, Dan Edmunds, of Edmunds.com, said you should try to avoid hitting potholes at all costs, but sometimes, there's no way around it. Edmunds added that following proper inspections of your vehicle could save you in the end. Also, steering clear of any claim you have to make on your auto insurance is the best scenario for drivers.

Finding an auto insurance company that will cover your claim and not raise your rate takes some research. However, using CoverHound to find the most affordable auto insurance rate and an insurer, who will cover your pothole damage claim without raising your premium, will make the process a lot faster and easier.