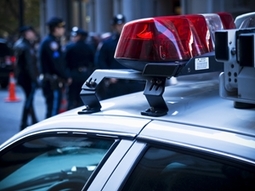 With the city's aging fleet of motorized, three-wheel scooters finally being disposed of, the New York City Police Department is introducing a pilot program later in February that would make Smart cars the new mode of transportation for cops in residential areas and neighboring parks and schools, according to the New York Daily News.

The police commissioner sees that move as a cost-saving measure as some of the scooters cost $27,000 a piece to replace. The NYPD has already purchased nine Smart cars for a total of $119,000, with each individual car roughly half the cost of a scooter.

The single-occupant cars are safer than scooters because Smart cars contain air bags, whereas the scooters were effectively motorcycles, said Deputy Commissioner Robert Martinez, according to the Daily News.

While onlookers may find it odd to see the new vehicles on the road, the NYPD is confident that Smart cars are the way to go and are a safer and more efficient upgrade from the scooters.

"We have acquired a number of them to test them out," said Bill Bratton, NYPD police commissioner, the Daily News reported. "Actually, in many instances they [Smart cars] are more maneuverable than the scooters. They're also cheaper, interestingly enough."

The city will also save money, and if the program is successful, more Smart cars may be used across the five boroughs. The NYPD couldn't have picked a better car to increase the efficiency of their fleet, as the Smart car is the top-ranked green car on the annual American Council for an Energy-Efficient Economy list, according to the Los Angeles Times.

Taking into consideration a number of factors, including vehicle weight, battery weight and energy consumed during manufacturing and operation, the Smart Fortwo achieved the highest score of any vehicle in the history of the ranking.

With governments investing more in green technology and its use in public law enforcement, officials will be setting a new standard for fuel economy, potentially creating a ripple effect for drivers everywhere.

For more info on how to save money and be more fuel efficient, CoverHound can help drivers find cheap car insurance rates and energy efficiency discounts.