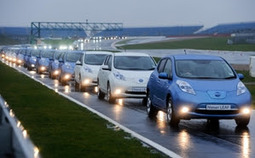 Nissan Leaf zero-emissions
While based on reader opinion, the Clean Techna poll may be onto something with its clear winner - the Nissan Leaf. Automotive.com reported that the Nissan Leaf was the best-selling electric vehicle in America in February, with 1,425 cars sold across the country. Recently, Nissan celebrated its record-breaking sales of more than 100,000 Leaf vehicles sold worldwide, making it the No. 1 EV. As of the end of March, U.S. sales topped 50,000 units.

As electric vehicles become less expensive and more consumers become aware of the environmental impact that gas engines can have, it is likely that sales will continue to rise over the coming years, despite challenges such as driving range and cold-weather effects on batteries.

According to The Street, Nissan is rumored to be revealing a 2015 Nissan Leaf with a 135-mile driving radius, reducing the need for drivers to plug in their vehicles and recharge as often. Currently, the Nissan Leaf has a radius of 84 miles. According to the automaker, the average Americans drives fewer than 34 miles per day, giving the electric vehicle more than two times the distance on a single charge.

If you're considering purchasing a new electric vehicle, remember that car insurance companies typically view EV drivers as a lower risk and may offer lower premiums.