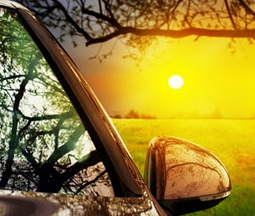 Though there are a host of electric cars and hybrids available on the market, like Volts and Leafs, a fully functioning solar-powered car has yet to become available to the millions of drivers in the U.S. In less than two years, a new car called "Stella" has become road-ready in California, according to Takepart.

The Stella runs completely on solar power, thanks to its entire roof being covered in solar panels that convert sunrays into electric power for the car. The car was built in the Netherlands by students from the Eindhoven University of Technology calling themselves Solar Team Eindhoven.

After its beginning testing phases overseas and winning the 2013 World Solar Challenge, the Stella was brought to the U.S. After a recent drive through California to showcase the vehicle, its capabilities became clear. The Stella is able to travel 500 miles on a single charge, according to Takepart. Additionally, its solar panels continuously produce electricity - nearly 1.5 kilowatts - as long as there is sunlight.

How it works
Coupled with its solar panels, the Stella has a lithium-ion battery pack to power the car. It's able to travel at speeds of 75 miles per hour - the legal limit in most states. It's also very spacious - able to fit four people and includes a large trunk.

Handling the vehicle is much easier, as well, because the steering wheel is made of a material that can expand or contract to alert you if you're going too fast or slow. If you want to turn, all you have to do is squeeze the side of the steering wheel in which you wish to turn in order for the blinkers to come on.

Makers of the Stella used existing technology to create the car, but updated it to make it more accessible, according to Cleantechnica. Most solar cars are compact and not really usable for any purposes other than commuting. The Stella is the first family-sized solar car.

"On average, Stella can generate twice the electricity it uses in a typical day," said Plugin America, according to Cleantechnica. "Students expect to see the car commercialized in five to 10 years."

With a cheaper alternative to power a car, drivers can update their auto insurance with the money saved. Insurance providers typically offer car insurance discounts for clean energy vehicles, as well.