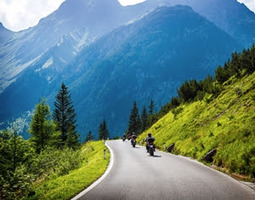 After a rough winter, most motorcyclists are looking forward to breaking out their hogs and going for a ride. Spring is one of the best riding seasons, but it can come with its own set of dangers as well. Between poor road conditions, more motorcycles out and about and a wet season, springtime can make the chances of getting into an accident significantly greater.

Oh, the weather outside is…
Spring weather is notoriously unpredictable, with temperatures all over the place and storms appearing suddenly. Remember that old saying before heading out for a ride in the spring, "April showers bring May flowers." Even past April, spring rainstorms can make roads slick and potentially dangerous for motorcycles.

If you're thinking about heading out for a ride, take a look at the weather forecast before you get too far from home. If it starts to rain while you're out, you might want to consider getting to someplace dry and waiting it out. Spring showers are common and can be brief, with sunshine immediately following. However, roads are slickest right after rain falls, so riders should be wary of heading out right after a storm.

Birds of a feather flock together
If you've been itching to get back on the road, you're not alone. Spring is one of the most popular seasons for motorcyclists, meaning there will be more of them along U.S. highways and roads and the risk of getting into an accident is higher. As a result, May has been deemed as the official Motorcycle Safety Awareness Month by many insurance providers in an effort to promote safe riding practices. With more riders out there, it's important that all bike owners invest in motorcycle insurance with full coverage in case of an accident.

Road conditions
Another major and potentially harmful obstacle to motorcyclists is potholes. After such a brutal winter, potholes have become one of the biggest issues cities face this spring and pose a huge threat to both bikers and car owners. Motorcycles are very susceptible to potholes and cracks in the road, which could cause a rider to lose control if they hit one. To avoid injuring yourself or your motorcycle, stay alert while riding and be on the lookout for any potholes in the road.

The best thing to do if you spot a pothole or disruption in the road is to avoid it. If you are unable to avoid it, the next best act is to slow down when approaching it. In either instance, it's important that you don't come to screeching halt or swerve too quickly, as you could end up damaging your front-end suspension, losing control of your bike or hitting another vehicle.

Riding safely
Of course, no one should get behind the wheel of a car or on the seat of their motorcycle while under the influence of alcohol or drugs. Motorcyclists should remember that riding under the influence is illegal and greatly increases the risk of getting into a fatal accident. On the road, bikers should always wear protective gear, including a helmet, boots, gloves and warm leather layers.