Mini me: Are minicars the future? 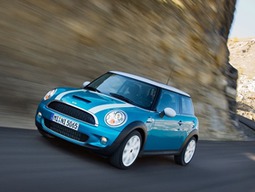 Perhaps you've started seeing tiny, box-like vehicles on the street and thought they looked out of place. Compared to the standard size of American cars, foreign imports from Japan might appear to be miniature in size and odd in style. These ultralight, fuel-efficient vehicles are all the rage in Japan, though some economists doubt the same models could ever be successful elsewhere in the world.

In Japan, 90 percent of all cars sold are Japanese brands, while a third of those are minicars only available in the country. Part of the reason these vehicles aren't readily available in other parts of the world has to do with their development. Originally planned to be inexpensive cars to fill demand after World War II, minicars are often deemed too expensive or too small for other markets. As the world's third-largest car-buying market, behind the U.S. and China, Japan's taste in vehicles remains unique.

Beyond minicars, Japan has also become an industry leader in fuel efficiency, though it does have a lot to do with the size and weight of a vehicle. No doubt a large American SUV will suck through more gas than a small hybrid. Some Japanese carmakers already have a solid market base in the U.S., such as Toyota, Honda and Nissan. These foreign companies are continuing to push the envelope of what cars will look like in the future - even if the cars are only in Japan.

Insuring minicars
In the U.S., some minicars have become popular among drivers. The imported Mini Cooper and Smar Car have made a name for themselves in the states as a small and inexpensive alternative to other types of vehicles.

When it comes to auto insurance, smaller cars are generally cheaper to insure than large SUVs or more expensive cars. Other factors such as age, driving record and location may weigh more heavily than the model of the car, however.

According to the J.D. Power Avoider Study, the biggest reason Americans don't buy a car is because of its style. This means that buying a car is more of an emotional purchase rather than one of logic. For this reason, it may be difficult for Japanese models to break into the American market - if they ever will. What was most important for Americans, however, was fuel efficiency - a plus for Japanese carmakers and minicars. Price is also another important factor, with 36 percent of respondents saying it is a reason they would avoid buying a vehicle.