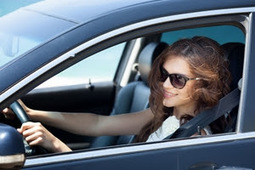 After the Great Recession, it seemed that everyone had a prediction about how millennials would lead their lives. Millennials, they said, wouldn't buy cars, they wouldn't buy homes and they wouldn't want the suburban lifestyle their parents did.

Despite pessimistic outlooks on the damage millennials would do to the auto industry, last year, this age group comprised 27 percent of new car sales - 9 percentage points higher than in 2010. According to JD Power & Associates via Bloomberg, this isn't quite as much as the baby boomer generation, which is historically the most enthusiastic car-buying generation. But as of the end of 2012, millennials did buy more cars than Generation X.

Trains vs. cars
Those who doubted millennials' car-buying intentions often cited moves to major cities and a preference for public transportation over driving as primary examples of what would drive this change. It's true - more people in the 16-to-36 age group are driving less today than they did 20 years ago. But car-dependent millennials are still the majority overall. According to Kelcie Ralph, an assistant professor of urban planning and policy development at Rutgers, 79 percent of people age 16 to 36 are drivers; cars are their main form of transportation and they drive an average of 24 miles every day. No, it's not as much as the 83 percent that were drivers in 1995, but, according to CityLab, it's still the overwhelming majority of millennials.

Money makes a difference
Low job rates among millennials also led people to believe young adults would be buying fewer new cars. In recent years, the job market has shown considerable improvement. According to a 2014 report by the Council of Economic Advisors, 990,000 more millennials were employed in June 2014 than 12 months prior. This lowered the unemployment rate of millennials by 1.8 percentage points. Not surprisingly, this makes a difference in millennials' likelihood to buy cars. According to Bloomberg, lower interest rates on loans and more time to pay them off also make buying a car more of a reality.

The American dream
Those people who said millennials wouldn't be buying cars anytime soon also said they wouldn't be leaving the city, either. It turns out, this isn't the case at all. According to data from the U.S. Census Bureau earlier this year, 1.25 million people age 20 to 29 moved out of the city in 2014. How will these young people be getting to work? Most likely with their new car.

If you are a millennial defying people's predictions, make sure your car is insured. CoverHound will help you find the perfect car insurance plan for you.