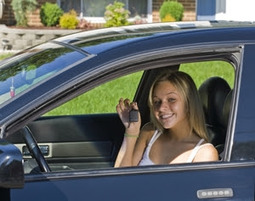 Of the different groups of drivers, teenagers are by far the most likely to get into an accident and cause auto insurance rates to rise. During their first year of driving, teens have the highest crash rate.

One major problem among teen drivers is distracted driving and texting while operating a vehicle. These issues have resulted in a huge upswing of related accidents. According to the Centers for Disease Control and Prevention, people between the ages of 15 and 24 represent 14 percent of the U.S. population but are the largest group in terms of costs from car accidents. In 2010, young males accounted for 30 percent, or $19 billion, of the total cost of motor vehicle injuries and 28 percent, or $7 billion, for young females. Of fatal crashes involving teens, 21 percent were directly related to cellphone use, according to the National Highway Traffic Safety Administration.

Monitoring with technology
As a result of the increase in car accidents caused by distracted driving, some parents are taking matters into their own hands. Nowadays, there are several different methods for parents to monitor what their teen is doing in the car. As smartphones become more popular, a few applications have popped up that allow parents to monitor how their teen is using a phone while driving. There are even options to limit certain cellphone privileges, including text messages and calls.

Additionally, there are some vehicles that can come equipped with technology that allows parents to control the volume of the radio, the maximum speed and block incoming calls and messages by syncing phones with the car. For nervous parents, these technologies may help cut down on distracted driving by their teens.

It is also well-known that teens tend to drive safer when they are being supervised. As a result, some parents are beginning to install cameras in their vehicles to monitor teen behavior. While these do not directly limit cellphone use or control the speed of the car, knowing they are being watched may deter a teenager from engaging in dangerous practices like speeding or distracted driving.

When it comes to car insurance, having a teenager on your family policy will undoubtedly make premiums rise. However, without accidents or claims, these rates may not increase. Other factors like good grades can also help reduce the spike to auto insurance premiums when adding a teen driver.