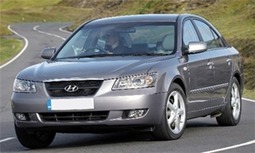 The Hyundai Sonata is marketed as an affordable sedan with style and safety features that make it feel more sportive. It's a popular car that has been classified as full-size by the EPA but is still competitive among midsize models. As a great family car or for the single driver, the Sonata is spacious and powerful, and in its fifth generation of redesign. Insuring this cruiser depends on its safety ratings, theft rates, damage susceptibility and replacement costs.

Safety ratings Insurance companies appreciate cars with better safety ratings, as they are more likely to keep you safe in the event of a crash and their drivers are less likely to file a claim. Safe drivers are also thought to drive safer vehicles, which may contribute to the reason insurance companies offer lower premiums for these types of cars.

The Hyundai Sonata was rated as a top safety pick in 2013 by the Insurance Institute for Highway Safety, achieving top ratings for four of the five categories measured. The small overlap front was the only aspect of the car that did not receive the highest rating. As a top safety pick, the Sonata is more likely to keep you safe and experience less damage in an accident.

Theft rates As a very popular vehicle, the Hyundai Sonata has ranked near the top when it comes to newer cars stolen most often. According to MSN, the Sonata ranked number 22 on the list, and its 2010 redesign has made Hyundai a very attractive and reputable brand. In 2011, 225,961 Sonatas were sold. The National Highway Traffic Safety Administration also rated it high for thieves, with a score of 2.5 on its index. By comparison, the Chevrolet Malibu, which ranked 20 on MSN's list, had a NHTSA rating of 2.07 in 2010.

The Department of Motor Vehicles defines theft as taking either the entire vehicle or parts of a vehicle. Auto insurance companies take note of which vehicles have higher theft ratings. As these pose more of a risk for filing an insurance claim, it can cost more to insure a car that has more thefts. It can be difficult to know how much the type of vehicle will influence monthly insurance premiums, however, as age, driving history, gender and the state where the car is registered will generally weigh more heavily.

Replacement costs The Sonata is a very popular car in part because of its affordability. In general, luxury cars come with pricier maintenance and repair costs, with the Audi A8 topping Forbes' list of most expensive vehicles to repair. Hyundai's Sonata is a midsize sedan that has recently undergone several changes in its newer models, including higher engine outputs and better quality materials. Because of this, the replacement costs have risen, but they are still much more affordable than other luxury vehicles.