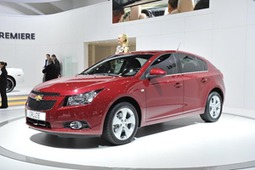 Who says you can't have it all? That's the question from Chevrolet's compact car Cruze. As a small car with big driving power, the Cruze is one of the more efficient cars available on the American market. Reportedly, the vehicle gets 46 mpg highway driving, outpacing many other cars in its class, and starts at a price that is affordable for many car owners. As one of the more popular cars out there on the road, the Cruze packs a luxurious punch at an affordable price.

If you're an existing car owner or are shopping for a new ride, the insurance for a Chevrolet Cruze is based on its safety features, theft rates, replacement costs and damage susceptibility.

Safety ratings
According to the Insurance Institute for Highway Safety, the Chevrolet Cruze was a top safety pick in 2013. With four out of the five ratings marked as the highest designation of "good," the Cruze puts an emphasis on driver safety. The Cruze has many modern safety features like side airbags, a rollover sensor, electronic stability control and driver and passenger knee airbags that all increase the safety and protection of its passengers.

Theft rates
The Cruze is already a very popular car on the road, making it a very successful and sought-after vehicle by many drivers. According to Esurance, older cars that are versatile and in demand are more likely to be stolen and stripped down to their parts to be sold. While the Cruze did not make MSN Auto's list of the top 25 most stolen cars, a comparable vehicle, the Chevrolet Cobalt, came in among the top 10 in 2011. As the replacement vehicle for the Cobalt, the Cruze is likely to be among some of the most stolen cars because of its popularity. Anti-theft devices that can be enabled can help lower auto insurance costs.

Replacements costs
As a domestic vehicle produced by General Motors, parts for the car should be fairly easy to find. Compared to imported cars, domestic parts are generally less expensive. The expansive use of the car, along with its availability, has made it an affordable vehicle to repair.

Damage susceptibility
With a high safety rating, the Cruze is a strong contender for keeping you safe in the event of an accident. However, it did receive a lower rating for the front-end overlap, meaning that the front end was damaged during safety tests. The car held up pretty well overall in a crash test, with a low risk of significant injury. Compared to other vehicles in its class, the Cruze costs less to insure as the number of claims was well below the average of 110, according to the National Highway Traffic Safety Administration.