Honda Will Upgrade Your 2015 Fit For Free 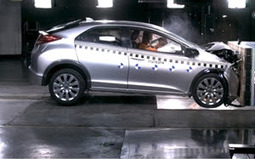 Honda received bad news in March when the Insurance Institute for Highway Safety gave its 2015 Fit a substandard grade on a small overlap frontal crash test. The reason for the poor grade was the bumper broke off on impact, which sent energy into the driver's area of the car, the AutoBlog reported.

This specific test has grown in importance in the auto safety industry. The test replicates what happens to a car when the front corner collides with another vehicle or object. Twenty-five percent of the car's front end on the driver's side hits a standing object at 40 mph.

"We had targeted 'Top Safety Pick,' and just weren't satisfied with not achieving that," said Chuck Thomas, Honda's chief engineer for vehicle safety.

Honda decided to turn its displeasure and poor safety rating into an effort to redesign the front end of the 2015 Fit - even while models were moving to showroom floors for sale. The manufacturer studied the test results and made modifications to the front bumper, such as reconfiguring the welds on the steel bumper beam.

The company did more than redesign the front end of a car currently for sale. It asked the IIHS to retest the car, The New York Times reported. And this time, the car received an acceptable rating on the small overlap frontal crash test.

Honda put the new configuration in place at its assembly lines on June 9, and now it's notifying 2015 Fit owners that they can get a free upgrade on their car, which may help consumers get a better deal on their auto insurance. The manufacturer will provide approximately 12,000 owners the new and better bumper. All consumers have to do is check with the dealer to determine if they have the original bumper and have it repaired, free of cost.

Now that the 2015 Fit's score has been improved, Honda has nine cars with a "Top Safety Pick" status.